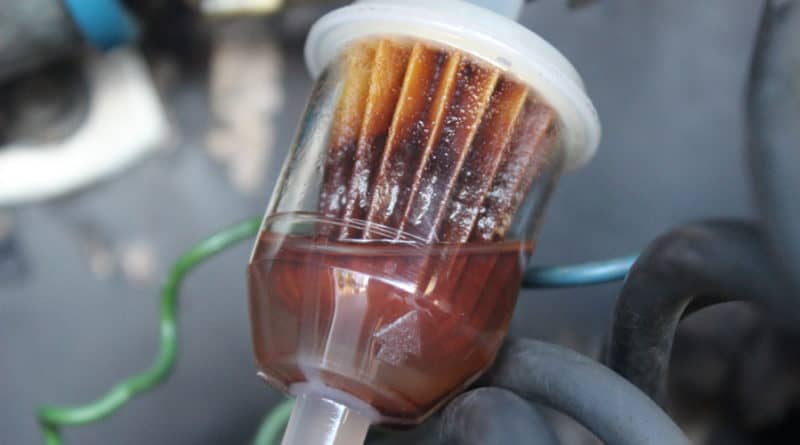 The most neglected replacement part of any car is definitely the fuel filter. Every car, diesel or petrol, uses fuel filter to prevent dirty fuel from entering the fuel injection system and clogging it up.

The fuel filter is mostly tucked away under the car or inside the fuel tank. It remains out of sight and we often tend to forget about it. Yes, it’s an inexpensive small replacement part but it can cause a whole lot of problems when it goes bad.

Some regions are known for having bad quality fuel. This leaves the company recommended fuel filter replacement schedule pointless.

When the fuel filter clogs up, look out for symptoms of bad fuel filter: Misfires, Stalling, Reduced Acceleration, and Noisy Fuel Pump.

However, some drivers can’t even notice the problem until the fuel filter becomes so choked up that the car won’t even start.

How does Fuel Filter Work?

All engines require fuel for them to do anything. If any debris obstructs that flow of fuel, it causes all sorts of problems.

High tolerances modern engines are more prone to be affected by fuel pressure variation due to high-pressure fuel injection system and having so many sensors in them.

The fuel filter simply traps the debris and prevents it from entering the fuel injection system. The diesel engines are also more prone to have water contamination. This problem is so evident that many diesel fuel filters also come with a drain valve at the bottom of the housing to release the water.

The fuel filter sits inline with the fuel line. There are two types of fuel filter but both uses multiple pleads of filtration paper to clean the fuel. The only difference lies in the housing:

Cartridge style fuel filter: In this type of filter, the housing of the filter and filter itself can be dissembled. Therefore, only the filter cartridge needs to be replaced. The new filter (paper element) gets placed inside the same housing. 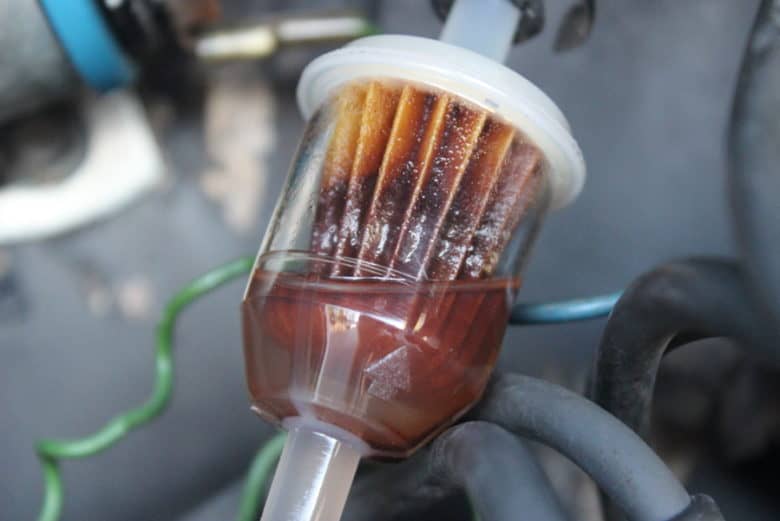 Completely Replaceable fuel filter: This type of filter is just one piece and the entire unit is replaced. Modern cars mostly use this kind of fuel filter. 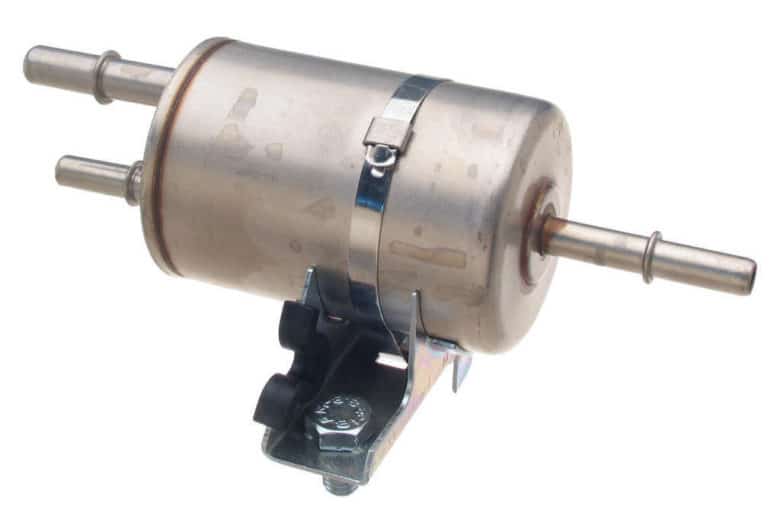 One would have to take the pump out of the fuel tank to clean the strainer. However, these filters are often labeled as lifetime use so in theory, it does not need replacement. In reality, however, these claims are often proven wrong due to the bad quality of fuel in some regions. Even if fuel quality is good, calling any part on a car as “lifetime” is just a misguided gimmick with an asterisk *.

Symptoms of a Bad Fuel Filter

We often encounter car related issues that could be symptoms of a clogged fuel filter. When the fuel filter clogs up, it starves the engine by preventing required fuel to enter the combustion chamber. Here are some warning signs that’ll help you troubleshoot the problem:

If you’ve owned the car for a long time and notice drop in engine power, it could be due to clogged fuel filter. The car might run fine at city speeds but when you take in on the highway and run it at high rpms for long, the dirty fuel filter will not allow the required volume of fuel to pass through.

After you’ve checked the things like spark plugs, MAF sensor and air filter, it’s a good idea to check if the fuel filter is not dirty. This can also happen due to low oil pressure or Bad EGR Valve

As you accelerate, the engine demands more fuel. But a blockage in fuel line will result in engine running lean (too much air in the combustion chamber).

The white deposit on the spark plug is also a tell-tale sign of lean engine combustion. Also, in modern cars, you’ll most likely get “engine running lean” warning when you use an ECU scanner to find trouble codes.

When the engine fuel starvation can also lead to misfires when you accelerate. Some cars will also make it dramatic with pops and bangs coming out of the exhaust. As a driver of the misfiring vehicle, you’ll notice when engine loosing power when you try to accelerate.

The misfire might not happen when you’re just accelerating smoothly. So putting pedal to the metal in higher gear is good way to check how engine performs under load.

When the blockage is severe, the car might not even be drivable. It might idle fine but as soon as you put it in gear and try to move, it’ll stall. You’ll experience this only if you ignore the above-mentioned symptoms of a dirty fuel filter. Learn what to do when the engine overheats

All these are also symptoms of a Failing fuel pump

Some cars won’t show symptoms of a bad fuel filter

Car manufacturers know that most people ignore servicing the fuel filter. Therefore, some cars comes with a mechanism that bypasses fuel filter if it’s blocked. The result is that the fuel pressure is maintained at the fuel injectors even though the fuel is not filtered properly.

This system might seem convenient at first but it can lead to bigger problems. I wouldn’t want dirty fuel entering the combustion chamber. There is a high chance that some debris will get stuck in the fuel injector or valves. As you can see it’ll result in expensive repair bill fuel filter is not replaced timely. No warning signs until it’s time to replace injectors.

However, sometimes, the faulty fuel pressure regulator can also lead to more than required pressure in the fuel rail. Then the car might emit black smoke and the spark plugs will get black soot deposit on them.

How often should you replace Fuel Filter?

Most car manufacturers recommend a new fuel filter every 20,000 miles or 32, 000 km. But every car is different, some use bigger fuel filter that can last a long time, while some use small filters that needs to be replaced more often. Your owner’s manual would tell exactly what your car manufacturer recommends.

That said, if you know that the fuel quality in your area is not the best, it’s best to replace fuel filter much earlier than what the manual says. After all, they are quite inexpensive in the first place. Regularly using fuel system cleaners also helps. best fuel system cleaners on Amazon

Learn How to change Fuel Filter

Watch this video tutorial by Chrisfix

Yes, a blocked fuel filter with most likely throw a error code. The codes can be related to low fuel pressure or lean engine running.

What are the signs of Clogged Fuel Filter?

Symtoms of bad fuel filters could be: Lack of power, Engine stalling, Engine Misfiring under load, and Noisy Fuel pump.

What kind of Noise do Fuel Pump make when filter is clogged?

When the fuel filter is not able to supply required fuel, the fuel pump struggles to maintain required pressure. You can hear knocking or ticking sound from the engine bay in this case.

How Often should you replace Fuel Filter?

Many car manufacturers suggest fuel filter replacement at 20,000 miles or 30,000 km. If you suspect that fuel quality in your area is not the best, then it doesn’t hurt to do it everytime your change engine oil.