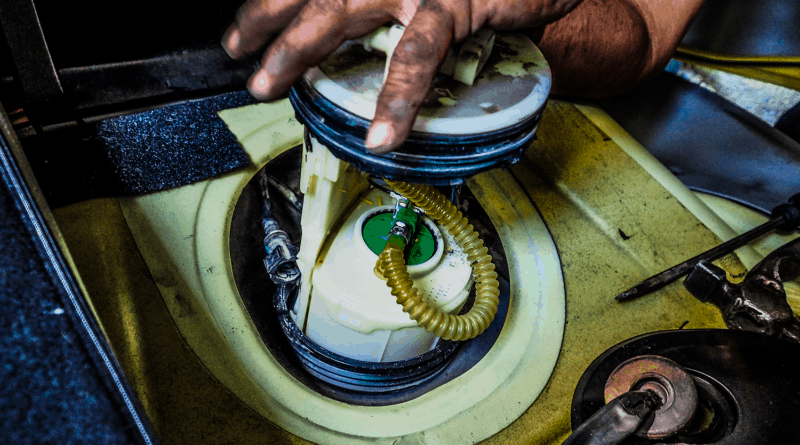 That humming sound you hear just as you turn on the ignition is the fuel pump pressurizing the fuel rail just before your crank the engine. The engine needs a set amount of pressure in the fuel line to ensure proper running of the engine. When the fuel pressure drops too low, you’ll notice all sorts of driveability issues.

All modern cars come with a fuel pump these days. Therefore, it’s good to know the symptoms of a failing fuel pump.

Symptoms of a failing fuel pump include: Hesitant Acceleration, Starting difficulty, Engine stalling, Engine not starting, Revs not rising above a certain point, and loud sound from the tank.

Your car may seem to run just fine if you’re just commuting in the city, driving sedately. But if you try to accelerate, the engine will be hesitant to deliver power. It may even start sputtering if you keep pushing the throttle pedal more.

This is more evident when the engine is running at higher RPMs for a sustained duration. This happens when fuel pump is unable to generate the required fuel pressure in the system. And if the engine is starved on fuel, it will not perform well.

Starting difficulty can happen due to many reasons like weak battery, bad starter motor, electrical issue, etc. But failed fuel pump can also be the culprit.

If you don’t hear the humming sound of the fuel pump before starting the engine, it’s a clear indication of a problem. Now, the problem can also be due to a blown fuse. So check the fuse box before removing the fuel pump from the vehicle.

Are you stalling your car more often these days? You might think that something’s wrong with the clutch. But don’t rule out the bad fuel pump.

Moving a car from a standstill requires more fuel into the engine and when pump is not supplying enough fuel, the car will stall easily.

When the fuel pump fails completely, the car won’t start. This can happen even if the fuel pump is making the humming sound on ignition. Other symptoms of car cranking but not starting

Does your rpm rise slower than before? Maybe rpm needle does not rise reach redline even when you’re pedal to the metal.

You can also try this in neutral gear, in standstill position. The car might even start to misfire when you press the throttle fully.

Do you head a loud whining sound from the fuel tank? This could be your fuel pump crying for help. When the internal components of fuel pump if generating high friction, then start getting noisier.

You should replace the fuel pump as soon as possible. That’s because the pump will fail completely soon due to overheating.

Do you smell unburnt fuels from the tailpipe of your car? This means that the engine is running too rich on fuel. While ECU of the car manages the amount of fuel that needs to be delivered to the injectors, sometimes fuel pump might be pushing too much pressure in the rails.

This can happen due to some malfunctioned sensor that’s sending the wrong signal to the ECU. A faulty or incompatible fuel pump could also be the culprit.

Other Things that can Show Similar Symptoms:

Fuel filter clogged: The pressure in the fuel line could also be low due to the clogged fuel filter. All vehicles have a fuel filter that needs replacing at scheduled intervals. However, if you get adulterated fuel in your area, the filter would clog earlier.

Fuel filter is an essential and cheap replacement item and therefore you could replace it earlier than what the carmaker recommends.

Bad fuel: All gas stations inspect their fuel regularly but some are negligent or intentionally adulterate the fuel. Sometimes even water can enter fuel station’s underground storage tanks.

Now if this bad fuel is pumped into your vehicle, it will not run right. Older cars might not mind little bit of adulterants, but newer vehicles are sensitive to bad fuel. If you suspect bad fuel, it’s best to flush it out rather than run it through your engine as it can sometimes damage the engine.

Clogged fuel strainer: A fuel strainer, as mesh style filter sits inside a fuel tank. This filter prevents big dirt and debris to enter the fuel pump. But if it gets blocked, the fuel pump won’t be able to pick up the required fuel as strainer is causing an obstruction. Therefore, checking the strainer before ordering a new fuel pump is a good idea. Pouring fuel system cleaner can also resolve this problem

It’s a good idea to check for voltage drops and continuity with a voltmeter.

But it’s still a good idea to inspect the spark plugs if you face any driveability issues.

Dirty air filter: Air is one of the essential requirements for combustion. If the engine is not getting proper amount of air, it will struggle to run right.

A dirty air filter will make the vehicle feel sluggish to run, the engine won’t run freely. Thankfully, cleaning an air filter takes just 10 minutes. Just pull out the air filter from air box, and tap out the dirt. Blowing out air with an air compressor or a leaf blower is even better.

Regularly running the vehicle on low fuel: Do you run the vehicle on reserve fuel level and just fill it enough to reach quarter tank? Well, you might be hurting your fuel pump.

Once in a while running low fuel levels is fine but in long run, your fuel pump would fail early.

The fuel pump sits inside the fuel tank and when fuel splashes around while the car is moving, the pump sometimes sucks in air. This makes the fuel pump overheat as fuel is also used to cool it down while it’s constantly working.

Overheating and running dry makes the fuel pump’s internal components wear out faster. So, always try to keep fuel levels above quarter level. On the long drives where you have no fuel pump in sight, running into reserve is no big deal.

Contaminated fuel: If water, dirt or fuel tank rust enters the fuel pump, it could cause some damage. Fuel pump has very high tolerances inside and dirt or corrosion can act as abrasive or get stuck inside.

Clogged fuel pickup strainer: There is a mesh filter placed before the pump that prevents and big contaminants to enter fuel line. When this gets blocked, the fuel pump needs to work harder to generate the required pressure. This can wear out the pump in long run.