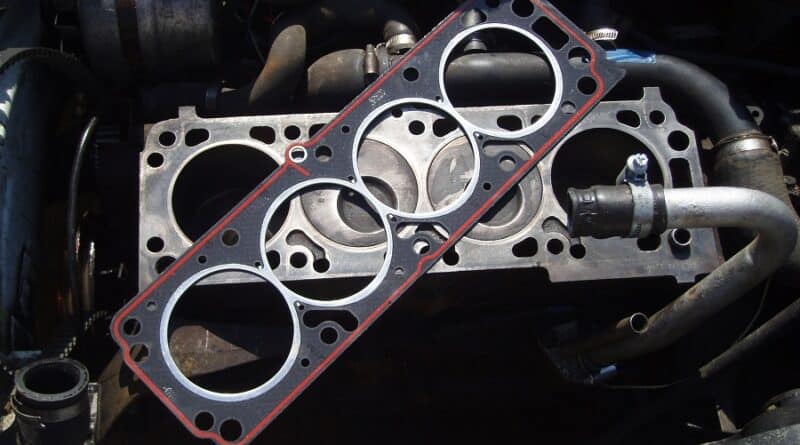 If your mechanic tells that your car has a “Blown head gasket”, Get ready for an expensive repair bill. Even though the gasket itself is quite inexpensive, the labor cost of installing it can be high.

An engine is divided into two blocks, cylinder bock (where piston and crankshaft reside) and cylinder head ( valves and spark plugs are installed here). The head gasket is sandwiched between these two metal blocks when the engine is assembled.

Even though head gaskets are very durable, it can wear out due to rubbing between engine block expanding and contracting due to heat. An engine can generate a lot of heat, especially if the cooling system of your car isn’t working well. If you continue driving with an overheated engine, the chances of blowing head gasket are very high. Also Read: Symptoms of bad thermostat

Another culprit can be engine knocking or detonation. When the fuel detonates before it’s supposed to in the combustion chamber, a lot of pressure is generated as the piston is still in its upstroke. This extra gas pressure might blow past the head gasket and make it leak. That’s why a blown head gasket is always a risk with an engine tuned for more power.

Let’s go over each of these symptoms:

If you open the oil filler cap and find any milky, yellow-brownish residue on it, that’s a warning for a failed head gasket.

This chocolaty liquid is formed when coolant water mixes with the engine oil. Head gasket seals the coolant channels but when it leaks, the engine oil will start turning milky due to this.

Keep in mind, this symptom can also appear if you drive very short distances. The condensation can collect in the oil pan if the car sits overnight with a cool engine. This condensation mixes with oil and forms a suspension. But, this little bit of water evaporates quickly when the engine gets warmed up. If you drive only short distances, the engine won’t warm up and water will stay suspended in the oil.

Alternatively, you can also check the engine oil level dipstick. If that’s also showing signs of milky engine oil. Then you can be sure that the coolant is mixing with the oil.

The coolant will then will show at the tailpipe in the form of water vapor. Since the exhaust will be emitting smoke, one might think that the piston ring has worn off. But if the exhaust doesn’t smell like burnt oil, it’s the head gasket that has failed.

Keep in mind, most cars will show vapor smoke during a cold start. But this smoke should go away when the engine is warmed up.

Now, when you’ll be burning coolant along with fuel, the coolant level will surely start dropping. Coolant level could also drop due to leaking radiator or coolant hose. But if you don’t see a pool of coolant under your car when you park it, you shouldn’t see a drop in coolant level. And if you do then your suspicion should go towards the head gasket.

The coolant leak from the coolant channel means that the engine is likely to get overheated. The overheating issue might not crop up if the head gasket leak is very small.

*Out of all the above symptoms are related to coolant loss, smoking tailpipe and milky residue under oil cap are very strong indicators of a failed head gasket.

This means, less pressure acts on the piston, and power loss is experienced. If the leak is big, then the engine might not even idle properly. Hiccup and sputtering were common with carbureted engines, but with the fuel-injected engine, it shouldn’t happen.

Accompanying the rough idling would be an exhaust leak/hissing sound coming from the engine if it’s due to failed head gasket.

Most of the repair cost goes towards installation labor charges.

Before sending your car to a garage, it is better to try and fix it by pouring an additive into your coolant.

K-Seal Head gasket repair bottle claims to permanently repair and fix most head gasket failures. We haven’t tried this our self, but reviews on Amazon look pretty good. We say it’s worth trying it out, especially if your car is old and it’s not worth spending $1000 plus on it. Alternatively, you can also try the Bar’s Leak head gasket fix

Can you keep driving the car with blown head gasket?

Can you fix Blown Head Gasket at Home?

There are some quick fixes like K-Seal and Bar’s Leak. If your vehicle can run fine for 20 minutes without overheating, these products can work for you. You just need to pour a bottle into the coolant tank and running the vehicle for few minutes. Sounds too good to be true, but it does work if the leak is not that big.