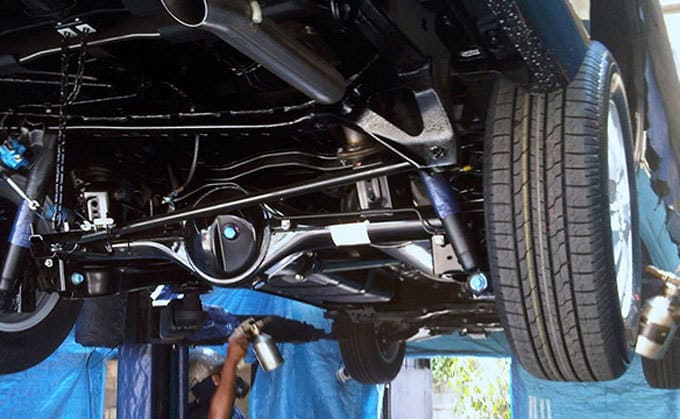 Is detailing your vehicle enough to protect it? Car enthusiasts are spending more and more on detailing their cars. The sales numbers of paint polishes, waxes, ceramic coating, graphite coating, etc proves it. But we ignore the most susceptible area of the car: Its underbody!

People say that no one’s seeing the underbelly of their car, so what difference does it make if it’s dirty. Yes, it’s a good point but if you want your car to last for a long time and remain trouble-free, then you should consider undercoating your car to prevent if from rusting.

Do you really need undercoating?

It’s true that cars nowadays come with galvanized metal that is protected from corrosion to an extent. But there can be certain conditions where that’s not enough. Let’s look at some of these:

1) You drive in snow: Most road workers use road salt to clear up snow on the roads. This salt can be highly corrosive and you don’t want it splattered all over your car’s under belly. In fact, if you live in cold region, your car dealer will offer car undercoat treatment before it even leaves their lot.

2) Car is driven in the coastal region: Again, salt and humidity is the culprit here. Vehicles near coastal regions corrode faster. And if you drive your car on a beach then that’s even worst than salty humid air.

3) You offroad your car: Offroading is hard on your vehicle, especially the underbody. You’ll be driving in slush, over big rocks and loose gravel. The car’s underbody is bound to get few scuffs. Even if you avoid any scraping, every nook and cranny will be covered in mud. This gets very difficult to wash even with high pressure washer. So it’s better to get car under body treated if you will be offroading your vehicle.

4) You want extra protection: Extra protection is always better. Roads and conditions are unpredictable and it’s better to be on a safer side if you truly love your ride. Underbody driveway scrapes are also common. You’ll want to have a layer of underbody coating provide that extra safety margin to car chassis.

While this may sound strange, wax derived from sheeps is a proven anti rust treatment. This wax is secreted by sheeps to condition their wool. This material is extensively used in commercial setting to protect rigging machinery, ships, and excavators from rusting.

This thing is quite effective on vehicles too. It covers every nook and cranny of underbody with a sticky wax. After spraying, it needs a curing time of a day or two.

Like Lanolin Wax, the dripless oil spray also form a wax like coating on the surface. While Lanolin wax is derived from sheeps, oil spray is mostly chemical formulation.

Dripless oil spray also repels moisture and prevent corrosion for years. For proper treatment of underbody, holes might have to be drilled into few areas of vehicle underbody. This aids product to penetrate and coat difficult to reach areas.

This is quite neat and easy to implement anti-corrosion method. It makes us wonder why don’t all car comes pre-installed with this device from the factory. An electronic rust inhibitor is a small device that supplies weak current to rust-prone areas of your car. While dealers charge around $1000 for this device, it can be had for $300 from an aftermarket shop.

That said, there are still two school of thought regarding this method. Some can vouch for it while people at Automobile Protection Association ask to save out money and don’t bother with it.

Spray on rubberized coating is one of the most popular and easiest undercoating method. They come in spray can form for easy DIY experience. The spray contains rubber and tar like thick substances that coats the underbody and seals it once it dries up.

It is easy to use but it still requires a lot of elbow grease to do it. Not to mention, a car lift.

This video above compares the most popular anti-rust sprays that are easy to use.

This is a professional-grade rubberized protective undercoat spray. The rubber layer over the bare underbody metal protects it against stone chips and provides superior rust protection. If you want to work on your vehicle yourself, Rust-Oleum 248656 is a great DIY option.

USP of this is that the spray works even if it’s upside down. Rust-Oleum’s any-angle spray technology takes care of this. This feature is especially important when you’re treating car underbody, trying to coat hard to reach nook and crannies.

Rust-Oleum rubber coating gets dry to touch in just 1 hour. 1 can provides a coverage of around 10-15 sq.ft. So 6 cans should be good for small to medium size car. Truck or SUV would need around 8-10 cans.

The 3M 3584 rubberized undercoating works similar to the above mentioned Rust-Oleum 248656. This leaves a layer of black rubber coating over the surface. 3M says that it can be applied directly over the bare metal without preping the surface with primer.

The Rustspot RS-5 is a new age rust prevention system. It’s an electronic device that distributes weak current over the rust prone areas of vehicle. Some people vouch for the Electronic Rust Prevention system, while others prefers traditional undercoating method.

The company does offer 10 year warranty on this device. USP of this is that it’s easy to install as you won’t have to slide under your car to try undercoat difficult to reach underbody areas. This can be a good option if you want to try a newer rust prevention technology and want to take the easy route.

This product does not dries up to form a hard layer so it can be cleaned if required. It’s another USP is its non-toxic and non hazardous nature. Exposing yourself to toxic chemical based undercoats could be harmful for your health. It can provide rust protection for upto 1 year, after that you’ll need to recoat the underbody.

Fluid Film anti rust spray has a penetrating oil type of texture but it’s formulated with Lanolin wax for rust protection. It’s easier to coat difficult to reach areas as the oil can penetrate into tight spaces.

This product is used in marine and aerospace industry also. Like Woolwax this is also a great option if you don’t want to permanent undercoating of black rubber under your vehicle. And it’s non-toxic too.

Barrier Bond is a dripless anti rust coating. It dries up to wax like layer over the surface. This layer can resist gravel chips impact and provided good protection from rust. It has oily texture as it comes out of the can. This means it can flow into hard to reach areas and settle there as waxy layer of around 5mm thick.

Allow drying time of around 6 hours after applying this product. It smells like cherry so that’s a bonus if you don’t want to smell harsh chemicals while working under your car.

Unlike other spray on products that dries on to become rubber layer or wax, WD-40 remains as it comes out of the can. It penetrated deep into tight spots to provide excellent coverage. The company claims that this product blocks rust for upto 1 year in outdoor condition. But I’d say it should be an ideal product if you want protection for one monsoon or winter season.

If you have an old vehicle that’s already dirty from the underside, it’s better to use WD-40 than to cover the dirty area with rubberized coating as metal might continue to rust underneath the rubber coating.

*Always clean the metal surface before applying a permanent undercoat.

How Long Does Undercoating Last?

It depends on type of product you use. Some lasts just for one season, while others permanent rubberized coatings can last for many years. Inspecting and touching up the undercoating every year is a good idea.

Does undercoating has any cons?

How you apply undercoating will decide if the underbody would rust or not. It’s preferable that undercoating be applied to a new car right out of the showroom when the underbody is clean of contaminants. An old car will have an underbody covered in corrosive elements.

Now spraying on permanent coating without cleaning metal surface means that corrosive elements gets trapped between the undercoating layer and continue to eat metal. The worst part is that you’d think the vehicle is protected but your vehicle will be rusted beneath the coating.