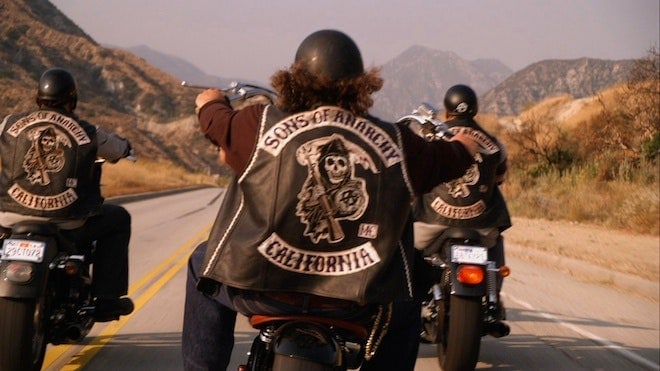 Harley Davidson and biker groups represent the American spirit of valuing freedom over everything else. But when these free-spirited biker groups get involved in wrongdoings, they become an eyesore for law enforcement.

Some of these outlaw bikers are just like any other mafia gang, involved in crimes like gun-running, drug peddling, contract killings, extortion, money laundering, shootouts, etc.

Since reputation of the club is big deal for these bikers, we often see fights breaking out between different biker clubs. The territorial animal instinct surely runs high in an outlaw biker’s life.

They are often called “one-percenter” because American Motorcycle Association says that 99% of motorcyclists are law abiding.

Just like Mafia movies, Outlaw biker movies also have huge fan following. Regular folks find their lifestyle amusing and are eager to know what goes on in the world of outlaw bikers. Let look at some of the most feared outlaw bikers gangs.

Donald Eugene Chambers, a marine that served in Vietnam started riding motorcycles after returning. He found most riding clubs to mellow for his taste.

In 1966, he started Bandidos motorcycle club in San Leon, Texas. The inspiration for the name and culture came from the mexican bandits. The living by their own rules mindset was the core of everything Bandidos did. Today there are over 2500 active members in Bandidos M.C.

The initial members of Bandidos were recruited from local biker bars in Texas. By 1970s, the club had over 100 bikers, many of them had served in Vietnam war.

This group is highly involved in smugling drugs across US – Mexican border. Their members are charged in multiple murder cases and accused in a lot more. According to FBI, they are one of the big four outlaw motorcycle clubs.

Even if you’ve never heard of any other motorcycle gang, I’m sure you have heard about Hells Angels. No doubt they are most popular and biggest out of all biker clubs.

Hells Angels started in 1948 and have become such a high-value brand that they had are incorporated in US and Canada. Through the corporation they sell merchandise and also sue movie production houses for infringing their copyright and trademarks. Wild Hogs was one of the movies that had to deal with Hells Angels in court.

Apart for fighting court battles, club’s 3000 plus members regularly fight battles outside court in their own way. The club members are actively involved in drug dealings, voilent crimes, and organised crimes.

Hells Angels have a long-standing beef with Mongols M.C. over southern California turf. Their most recent clash was at a gas station in Cleaveland, Ohio. On the Canadian border, Hells Angels don’t go along well with Outlaws M.C.

Outlaws Motorcycle Club is also called A.O.A as it’s incorporated as American Outlaws Association. This club was formed in 1935 in Matilda’s bar on the famous Route 66 McCook, Illinois. They are one of the big four outlaw motorcycle clubs in America.

Outlaws MC member count stands at over 1700 men, all of them ride American made motorcycles. They have great influence across the canadian border, which helps them smuggle drugs in and out of USA. Outlaws have intense beef with Hells Angels MC. In fact they often use the phrase ADIOS ( means goodbye in Spanish) as an acronym for Angels Die In Outlaws States.

Apart from 43 Chapters in USA, Outlaws have 20 chapters in Canada, 30 chapers in England and Wales, 33 chapters in New Zealand, 15 in Belgium, 15 in Brazil, 7 in Chile, 1 each in Ecuador and Czechia, and many more across the world.

Pagan Motorcycle Club was formed in 1959 in Maryland. But it was not an outlaw motorcycle club until early 70s when John “Satan” Marron became incharge of the club.

After 70s they went against Hells Angels and started gun running operations. Inspite of their small size of around 900 members, they are classed as one of the “Big 4” by Bureau of Alcohol, Tobacco, and Firearms.

Pagan gained notoriety over the years with support from the Italian Mafia and Aryan Brotherhood. Their activities included drug smuggling, arms dealings, bombings, etc. In 2018 their Rhode island clubhouse was busted and lots of illegal weapon were recovered, including a rocket launcher.

Pagans still go aggressively against Hells Angels and leave no opportunity to attack them. Pagans have around 100 chapters, mostly along the east coast of USA and Puerto Rico.

Cossacks M.C was formed in Tyler, Texas in 1969. This group doesn’t want to call itself an outlaw motorcycle club but their actions speak otherwise.

Cossacks club came into limelight recently due to shootout with Banditos M.C in 2015 that left 9 people dead.

Cossacks club members exclusively use only Harley-Davidson motorcycles as a mark of patriotism towards USA.

Bacchus motorcycle club is based out of Canada. It was started in August 1972 in Albert country, New Burnswick.

The club name Bacchus took inspiration from the Roman counterpart of the greek god, Dionysus. He is considered a god of wine, women and song. Dionysus was regarded as a protector of those who don’t belong in regular society.

Bacchus has remained active mostly in the Ontario region but in 2014 they merged with Original Red Devils MC. This expanded the club and now the Bacchus riders have switched the bottom rocker on their jacket to “Canada” from “Ontario”. This club has around 100 active members spread around in 13 chapters in 5 Canadian province.

This move would also avoid any conflict with Hells Angels as they claim the right to use bottom rocker on jacket to represent the local chapter or province.

Bacchus club members are actively involved in drug running. Drugs like Crack cocaine Hashish, and MDMA. With drug dealing there comes problems they have to deal with through violent means.

Pissed off bastards of Bloomington

Over 4000 bikers from several motorcycle clubs attended this event, including Pissed off bastards of bloomington, and caused a ruckus. Lots of booze, racing on the streets, fighting, vandalism, etc.

This gave birth to the term 1 percenter when AMA said that 99% of bikers were law abiding. The 1953 movie, “The Wild One” is based around Hollister Riot.

One of the founding members of Hells Angels, Otto Friedli attended Hollister Riot with the Pissed off bastards of bloomington.

POBOB MC still exist today but it’s a small member group that don’t come into limelight too often. Pissed off Bastards of Bloomington merged with Pissed of Bastards of Berdoo. So POBOB MC can stand for either of them.

The Sons of Silence MC was founded by Bruce Richardson in 1966. He served US Navy from 1958 to 1960 and then settled in Longmont, California after discharging. Ten years later, Leonard Lloyd “JR” Reed, Jr, also a Navy veteran, became the club president and held the position for the next 22 years.

They have backing and protection of Hells Angels but often clash with Mongols MC.

In 1998 the club expanded to Germany by starting a chapter in Munich. They have been expanding with many more chapters in Germany since then.

Vagos Motorcycle Club was formed in 1965 in Bernardino, California. This club is also referred to as a “Green Nation” because its members generally wear green merchandise.

The founding members of the club, all Mexicans, were initially a part of Psychos MC. But after some disagreements few members decided to start their own thing, Vagos MC. Vagos in spanish means a vagabond or gypsy.

Today Vagos has around 4000 members spread over its 200 chapters. They have international presence in Mexico, Sweden and Australia. But majority of the members are Caucasian or Hispanic.

Mongols Motorcycle Club was formed in 1969 in Montebello, California by David Satillan. It started as a regular motorcycle club by young vietnam war veterans who wanted to ride. But the club gained a bad reputation within 15 years of forming.

Presently there are around 2000 members in this club. Mongols have great influence in southern California, majority of them being hispanic males from Los Angeles area. But they are spread out over USA with chapters in 14 states and have international presence in 10 countries. Moto of Mongols MC is “Respect few fear none”.

The bureau of Alcohol, Tobacco and Firearms thinks that Mongols are the “Most voilent and dangerous outlaw motorcycle gang in America”. At one point, Mongols had as many as 270 warrants issued against them at once. Mongols have had major conflicts with Hells Angels MC and Mexican Mafia.

There are some outlaw motorcycle clubs that started out like a regular law-abiding motorcycle club but turned rogue with time. But Warlocks has been one if the most violent biker club since its inception. In fact, many outlaw bikers refuse to associate with them due to their reputation.

Warlock motorcycle club started in 1967 in Florida. Its founders served in the US navy on the USS Shangri-La aircraft carrier. Even today, Warlocks are most active in Florida where they have 11 chapters. Apart from this, they have five chapters in Virginia, seven chapters in South Carolina, four chapters in West Virginia, two chapters each in Georgia and Ohio, one each in Minnesota, Tennessee, and New York.

This group members are involved in Gun and drug running. Recently in 2014, four Warlock members were arrested in guns and drugs bust in Canada.

Satan’s Sidekick is an unique Motorcycle club that it requires its members to be black. This all black motorcycle club was formed in 1970s in Detroit, Michigan.

This is a relatively small group with three chapters in USA: Satan’s Sidekick Cleveland, Detroit, and Lousville in Kentucky.

Satan’s Sidekick was in news recently where their Detroit clubhouse was raided by police and one person was killed in a shootout at the Cleveland Clubhouse.

The Highwaymen Motorcycle Club was formed cropped out of Detroit, Michigan in 1954. This is the largest motorcycle club in Detroit, having over three hundred members. Apart from this, they have chapters in Tennessee, Missouri, Ohio, Indiana, Kentucky, Florida, and Alabama.

We can understand more about this club from its two sayings: “Highwaymen Forever, Forever Highwaymen.” and “Yea, though we ride the highways in the shadows of death, we fear no evil, for we are the most evil mother f**k*rs on the highway.” The first shows their comradery, while the second one tells how they look up to being evil

This club had to face several police and FBI investigations, especially in 1973, 1987, and 2007. In the 1970s, the club members were convicted of bombings, raiding homes and clubhouses of rival gangs.

The logo of Highwaymen is a skull having wings and wearing a biker cap. This logo doesn’t have any color in it, just monotone silver and black. This insignia sure does portray a tough image.

Initially, till the late 90s, most club members were Italian or Spanish. But from 1999 onwards, Polish origin member also started joining the club.

Since then, Polish members have greatly influenced the culture of the club. The Greenpoint, Brooklyn chapter formed in 2010 has a Polish president: Daniel Sadowski. Unknown Bikers MC website also has a lot of polish text. The club members can also be spotted bearing Poland flag patches on their vests.

In 2012, Unknown Bikers Club expanded to Poland. Apart from this, the club also has an international presence in Iceland and Puerto Rico.

Other Biker clubs (to be discussed later)

Who are Hells Angels Allies?