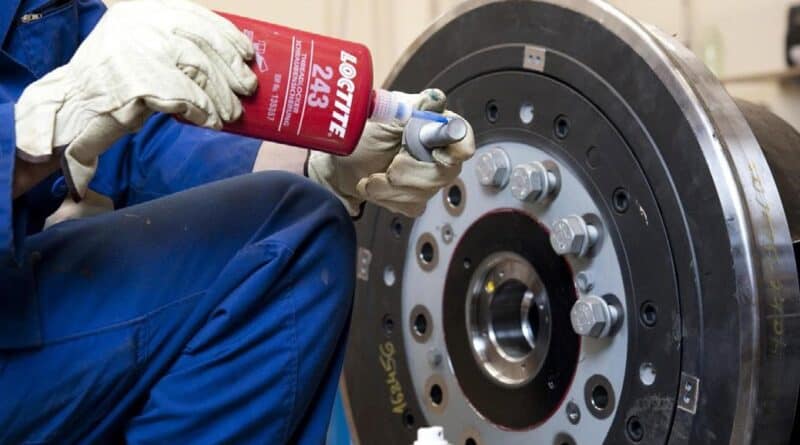 Most home mechanics love working on their machines but the lack of professional training often come in their way. Most of them don’t know how to use threadlockers.

A drop of threadlocker should be applied on fasteners to prevent it from loosening overtime due to vibration. It also prevents fluid to leak out or leak in due to gaps in threads.

But one question that often crops up is: What’s the difference between Blue and Red Loctite threadlocker?

Well let’s clear this up really quickly for you: Blue loctite threadlocker is for using on fasteners that you want to unscrew easily. Red loctite is for a more permanent fix, on parts that you won’t be loosening for years to come.

A home mechanic will most likely be needing a medium-strength Blue Loctite 242 or 243 threadlocker more than the Red loctite. This is great for fasteners like oil/coolant drain bolt, motorcycle front fork bottom bolt, and for most bolts that you don’t want to loosen overtime due to vibration.

While fasteners using blue Loctite can be loosened easily, a Red loctite requires heating the area around bolt to around 500 degree farhenhiet with a blow torch. That’s why you should never use red loctite on plastic parts.

How to Apply Threadlocker?

If you’re using threadlocker, you’re already ahead of most home mechanics who never use it. However, for proper bonding, you need to ensure these three things:

1) Clean the Nuts & Bolts/Screws: The threads of fasteners should be free from dirt and oil. A quick spray of parts cleaner and wipe down with a cloth is all that’s needed.

2) Only one or two drop is required: You just need to apply a drop or two of loctite on thread of the bolt. Put a drop approximately where the threads on bolt will make contact with the inner threads when the bolt is seated in fully. As you tighten the bolt, it will spread all around to form a good seal.

3) Give it a curing time of 24 hours: The loctite is in liquid form and it needs around 24 hours to dry and cure fully. This is important to note if you are working on a hydraulic system as oil can leak and loctite won’t be able to form a proper seal.

How to remove Threadlocker?

The red threadlocker required a blowtorch. Light up the blow torch and use it over the bolt and the area around it for 2 to 3 minutes. Now unscrew it with a hand tool and it should come off fairly easily.

Threadlockers come in four basic colours: Green, Red, Blue and Purple. Loctite, Permabond, and Permatex follow the same color code which makes it easier for us to identify what threadlocker to use for which application.

Green: The green threadlocker is quite thin and flows easily in tight, difficult to reach cracks and crevices. This is recommended for preassembled fasteners often used in electrical connectors and set screws that sits flush with the part it screws into.

The bonding it provides is more than a general purpose blue threadlocker. It’s a medium to high strength threadlocker. Curing takes around 24 hours, and to remove, heat might be required.

Red: As described above, red one is a high strength threadlocker. The bonding is very strong and requires blow torch to heat the fastener before cracking it open. That’s why it should be used only for parts that you won’t be opening anytime soon. High-stress parts like automotive chassis bolts can use Red threadlocker.

Blue: The blue threadlocker is the most popular threadlocker. It’s categorised as medium strength and fastener can simply be loosened with hand tools. If you don’t have any threadlocker in your toolkit, Blue 243 loctite is great to start with first. I used this to resolve my motorcycle quickshifter sensor issue

Purple: Purple threadlocker is categorised as low strength bonding. This is great for using on soft metals like aluminium and brass. If you are afraid that high torque on the bolt can damage the threads or head, then low strength threadlocker is ideal for such situation.

What's the difference between Loctite 242 and Loctite 243

The Loctite 243 is the improved version of the Loctite 242. It’s more resistant to oil and more surface in-tolerant. It can be used for rocker studs, oil sump, brake calipers, pulley assemblies, fork suspension drain bolt, etc.

What is blue Loctite used for?

Blue loctite is a general purpose medium strength threadlock. If in doubt, this is the threadlocker you want to use. It prevents bolts loosening due to vibration and also prevents rust to sieze the fasteners.

What is the strongest Loctite threadlocker?

Red Loctite is the strongest threadlocker in their range. You’ll most likely require to heat the area before disassembling fastener.