Home » Tips & Tricks » What is Rebuilt Title Car? How can your Insure one? 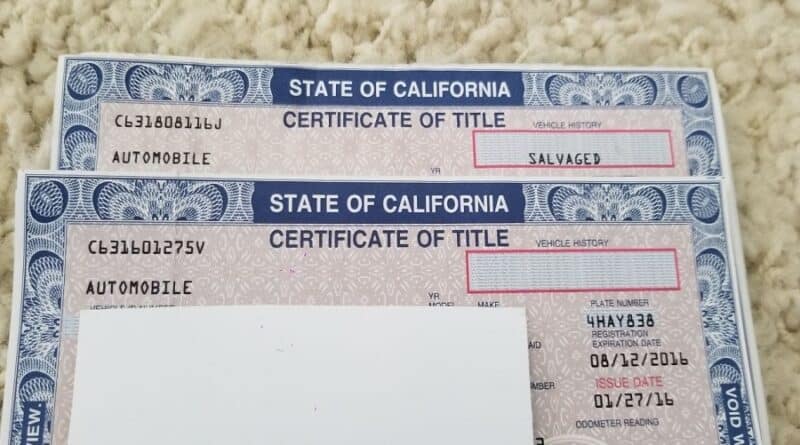 Owning something new and refined is great. But the feeling of owning something that’s been lost to time, and then restored to perfection is unparalleled.

Rebuilt Title car is a vehicle that restored from salvage condition. It recieved the Salvage title earlier when it was declared a total loss by Insurance company that paid claim on it.

Whether it’s old and restored watches, artifacts, or cars, taking something and revamping it completely from scratch is a fine art, and needs great technical knowledge. A rebuilt title car is no different. In this article by Motoring Junction we’re going to see exactly what such a car is, and how you can go about insuring one.

What is a Rebuilt Title Car?

At its core, a rebuilt car is a vehicle – that’s been salvaged previously by the insurance company. Sometimes easy to repair or rare vehicles are taken for restoration, almost to the point of being completely identical to the original. Such vehicles can be claimed as a rebuilt title car.

It’s also interesting to note that salvage title sounds bad and you might already be picturing image of mangled heap of metal in your mind. However, sometimes a broken headlight might and few dings and scratches might lead to Insurance companies declaring a vehicle total loss.

That vehicle is now the property of Insurance company. The company then sells it to a recycling centre or to a auto repair company to recoup some money out of it.

The repair shops often buy these vehicles and repair them on budget. They might buy used parts, repair dings and scratches to bring the cost down. The rebuilt vehicles are then sold as Rebuilt title cars.

Note: Only select states in the USA give you the label of a rebuilt title car, so be sure to check whether your state approves of it, before jumping the gun.

Are All Restored Cars Rebuilt Titles?

No. A vehicle having a rebuilt title on it means that it has been restored, down to its bare skeleton. Most used cars you find at outlets are not restored cars, rather they’re “washed” cars.

This means that they’ve been bought from their previous owner, given a good service and wash, and sold to the other customer. Nearly 1 of every 50 cars in the USA will be titled “washed” if you plan on buying a used one. So when someone says a car is a rebuilt title, you know what you’re getting yourself into.

Should I Buy a Rebuilt Title Car?

You can really go for rebuilt title cars over other used cars or new cars because they’re great for value, you’re guaranteed a good lifespan because of all the new parts churning inside, and you can always switch to better options if you feel like it. Just make sure of a few important things.

The most important factor you need to consider is whether you can insure the vehicle. Consult with your insurance agent. As many insurance companies throughout the States have a policy of not covering the rebuilt cars entirely, you might need to do some research.

Once you get the “go ahead“ from your insurer and you also decide to proceed with the transaction, get some homework done on the vehicle, to make sure your vehicle is really what it claims to be.

Before buying the car, ensure the there was no chassis damage to the car, and mechanically it shouldn’t be unsafe. Always get the rebuilt car inspected from a mechanic. A $50-$100 inspection fee for the mechanic is well worth it.

How To Check Your Rebuilt Title Car?

Before buying a rebuilt title car, you need to make sure that it’s actually been rebuilt and not just given a really good service. Most mechanics can’t tell the difference, but a rehabber with a sharp eye can find what’s been made of damaged cars. You will have to pay a bit extra to these expert mechanics, but they get the job done.

Find out how the car was exactly totalled. Many cars are easy to restore and made to seem rebuilt if the damages are minor. So watch out for the details.

Tip: Start using VIN checks and other free services like Carfax and Autocheck, as they can provide you with a bit of information on the vehicle’s origin and its history. From these reports, you might be able to know how it got totaled, why it was salvaged, and whether or not it’s a lemon.

But we highly recommend that you avoid vehicles that have experienced flood damage. Because they definitely start causing problems after a year or two, no matter how good the rebuild.

Getting Your Rebuilt Title Car Insured

After buying the rebuilt car, probably one of the most important things you’ll need to do is getting your car insured. The biggest problem you will face here is that insurance companies see rebuilt title cars as a big red flag.

The dogma is that a rebuilt title car may break down sooner or later, meaning more money running out of the company’s pocket. This is the reason why we asked you to make sure that you get into an insurance company that is ready to cover the insurance policy of that rebuilt car.

Pro Tip: If you already own a car, then you can use the same insurance company to insure your rebuilt car. Since they already have that trust in you, there are bound to be lesser hiccups in the transaction.

The next question you’ll have to ask yourself is whether your insurance company will cover the whole car and not just certain sections. Most insurance companies would work around loopholes to not cover the entire vehicle, but if you dig deep enough, you’re bound to find someone who backs your entire car.

We’ve mentioned this a few times already, but always make sure that you have the right insurance company – one that is ready to cover you at all times to make sure your car does not rip you off. And be ready to explore many companies to find the one that’s right for you.

Although rebuilt title cars are of great value and you can get them cheap, they need to be approved by the DMV to make sure your car is not a nuisance to fellow road users or yourself. Once you buy your car, you’ll have to make a trip to your state’s DMV to get it approved.

After your car has been titled “rebuilt”, there’s no going back. So be sure to get a professional mechanic to inspect the car and see if it is safe since so much of your time and effort is being put into buying your car, not to mention your hard earned money.