Well, for every company what matters the most is what its customers desire, and responding to a demand for visual upgrades we have the 390 Duke, 200 Duke and a new entrant- the 250 Duke. Catering serious performance, wonderful features and bold & intense look, the all new 390 Duke has been awaited for eagerly. It now features a revamped frame that helps to raise ground clearance to 185mm, plunks up the height of the seat by 30 mm and cuts down wheelbase to 1375 mm. It also gets a split-all LED headlamp, and with these transformations gets to flaunt a more sporty look. The motorcycle with its bag of changes closely resembles the KTM Super Duke R. It also appears to be bigger now with body panels that have been redone completely. While the revamped Duke 390 has a bigger front disc brake of 320 mm, it features the same cycle parts as before. All these additions have come at a cost of adding 7 kilos to this bike and it now weighs 149 kilos. To increase its range, it now features a larger 13.4 litre fuel tank.

The power units generated by the 373.2 cc engine remain to be the same at 44 PS, but what changes is the peak torque, which has been raised to 37 Nm as compared to the previous 35 Nm. It also features ride-by-wire, leading to a fine control response and at the same time to take care of brisk downshifts, it has a slipper clutch as well. To comply to the Euro-IV, it looses the underbelly exhaust and comes with a chunky side muffler.

The most exciting thing that the new KTM 390 Duke will offer is the brand new color TFT display. This will be linked to the handlebar controls on the left. That’s not it, you can also use the app ‘KTM MY RIDE’ to sync it to your smartphone. The introduction of 250 Duke was a surprise even though it is offered in some international markets. This variant will perfectly fill the gap between 200 and 390 Duke. The new 250 Duke takes its styling cues from the new 390, albeit with a host of changes. The full-LED headlamp has been replaced by a conventional looking unit with a halogen bulb and integrated LED DRLs. Also, it misses out on the TFT display. The other differentiator is the new black wheels on the 250, while the graphics have more of white colour. Powering this bike is a 248.8 cc single-cylinder motor derived from the 390’s 373 cc unit. This engine churns out 30 bhp and 24 Nm of torque, and is paired to a 6-speed transmission. The 250 Duke also features slipper clutch, but doesn’t get adjustable levers. As for the KTM 200 Duke, not much has changed. It carries over the same design of older model, albeit some graphics changes. The wheels are also orange coloured instead of black previously. Mechanically, the bike remains same but is now euro-4 compliant. And yes, the underbelly exhaust stays in this one. 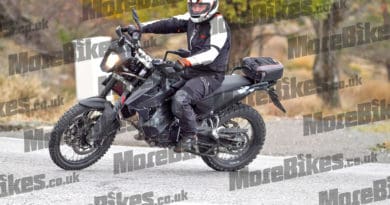