Home » Featured » What is ABS in a Car? How Does it work? 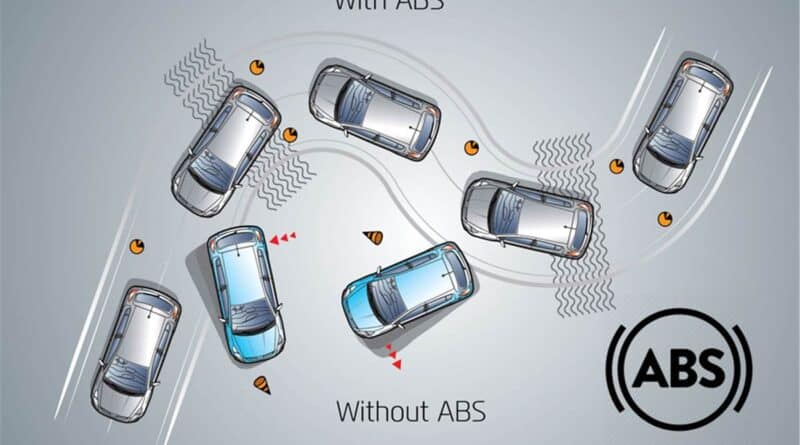 If you’ve skimmed through enough vehicle blogs and auto magazines, you know how almost everyone in the industry stresses on the importance of an Anti-Lock Braking System, or ABS for short.

Nowadays one will find it difficult to find a new vehicle that doesn’t come with an ABS safety system. Many countries around the world have made it mandatory. After all it’s such an effective safety system. In this article by Motoring Junction, we’re going to take a look at why ABS is so popular, and what makes it work so efficiently.

ABS stands for Anti-Lock Braking System, and is one of the most complicated yet useful safety innovations ever made in the history of vehicle engineering.

ABS essentially prevents the wheels to lock up and skid when brakes are slammed. Why is wheels lockup bad? There are mainly three reasons for that:

An ABS system releases the pressure from the brakes as soon as the wheel locks up. This happens in multiple successions during hard braking and can be felt as a pulsating sensation on the brake pedal. By balancing brake pressure on each wheel, the vehicle remains quite stable even under panic braking situations.

This prevents skidding and stops the vehicle before it can do damage to anyone in and around it. Simply put, the ABS makes your braking more efficient and less dangerous.

By now, you should have a general idea of what the ABS does – it stops a vehicle from having its wheels locked and flipping out on the road. The system was initially only meant to be used in jets, since their landing speeds are way higher, and stopping them in a single instant is simply unimaginable.

However, with increase in passenger vehicle capability and the power it can hold, it made sense to also have the system incorporated in them. So in 1971, Chrysler came up with its “Sure Brake”[3] and it was marvelous. Over time, this system was bestowed with various names – SureTrack, TrackMaster, AntiSkid – but the term ABS stuck to tongues more than any other.

Today, most countries require that your vehicle be equipped with an ABS system, and manufacturers are constantly working on improving this feature of the vehicle. To improve a feature that is updated almost every single year is no small task. The ABS is built in such a simple way, that tweaking one component can either boost or degrade the quality of the ride drastically, and hence each component has to be tuned perfectly. Let’s find out what makes an ABS what it is to understand this better.

In its simplest form, the ABS would consist of five components:

These are sensors that will measure the rotations per minute(rpm) of the wheel and notify when the wheels are about to lock themselves. We’ll come back to this part in a later section of this article.

This system gets information from the wheel sensor and comes into action as soon as your feet hit the brake pedal. They inform the ABS Control Module (described below) that you’re trying to stop the vehicle.

The valves are basically the limbs of the whole ABS system. They move around to put pressure and release pressure from the brakes. Brake callipers to be specific.

Of course the valves cannot move on their own. They need an external force pushing them (Newton’s first law of motion[4]), and this force is provided with the help of the hydraulic or air pumps (depending on the kind of vehicle you use) that are a part of the ABS.

Essentially the brain of the whole system. The Control module will gather data and instruct the physical components, i.e, the valves and pumps, when and how to do their jobs.

These five components come together to function as one single unit, and tweaking them in one way or another helps tune the system to perfection. As with any technology, the ABS also comes with its own classifications. Let’s take a quick look at each of them before we move on to explaining how they work.

Depending on the vehicle, manufacturer, as well as the kind of power you produce, ABS can be classified into five different types:

Usually found in rear-wheel drive vans, SUVs and pickup trucks, this system has a single sensor at the rear axle to measure the speed of the rear-driving wheels. A single valve regulates both rear wheels. The valve will operate as soon as the sensor predicts that the wheels are going to lock (more on this in a bit). Since it only contains a single valve to do all the work, it can’t distribute brake force effectively and reliably.

Although not as common today, this system was popular back in the 1980’s, when almost everyone roamed around in a muscle car. The working is simple – there are four sensors, one for each wheel. If any of the sensors realizes an incoming lock, the two valves act to stop all four wheels equally. Again, proper brake force distribution between the wheels is not that accurate.

This system is still prevalent today in most four-wheel drive pickup trucks. The front wheels each have a valve and a sensor to their name, while the rear wheels share a common valve and sensor. This makes sense because during braking most of the force would act on the front end of the vehicle, so you need to predict accurately if the front wheels can take the strain without locking.

The above issue was solved to a great extent owing to an additional sensor to the rear wheels. This system allowed for more accurate predictions on wheel locking, and at the same time ensuring the front wheels receive a lot more braking torque.

The only disadvantage is that we would be leaving the rear wheels to share a single valve. So if one of the rear wheel locks, the valve will reduce brake pressure even on the wheel that’s still not locked.

Because why shouldn’t you have separate, compact sensors on each wheel, and four separate valves to apply equal pressure to all wheels. This is what most modern cars on the roads today use. Totally independent valve and a sensor for each wheel. Maximum braking force and accurate reading ensure you don’t ever fall prey to a slip ever again.

Now that almost everything is in place, and you have a clear idea of what the ABS is, let’s check out how the system actually works in real life.

Let’s say you’re going down a slippery road. As you’re cruising through at 50mph fearing you’re going to be late for work again, out of the blue a cat jumps in front of your car. It’s about 75 metres from you. You spot the cat fast enough to ram the brake pedal, and the car stops just about 10 metres from the terrified cat. You thought for sure you would have run over the cat, but your car stopped in the nick of time. How did that happen? One word – ABS!

As soon as you pressed the pedal, the brake control unit got its green light and signalled the ABS control unit to work its magic. The ABS control unit simply took in data from each of the wheel speed sensors, predicted how much pressure needs to be applied before the wheels lock and the vehicle goes out of control, and then did some quick math.

Once the theoretical data is available, the control unit sends the data to the pumps and instructs that the valves be pushed at this exact pressure. The result – a shocked-to-death cat and a pale-as-a-ghost driver, both safe and sound, with the vehicle in near perfect condition. Everything goes back to normal when the vehicle picks up again. Job well done.

One of the most important features of the ABS is that it allows for complete control of the vehicle, and does not give you the doubt of ever feeling like you’ve lost control.

It also reduces braking distance[5] considerably, and at times by as much as 10%. This is just as true with wet surfaces too, as we saw in our example with the cat.

While ABS is heavily positive for most driving conditions. However, experts advise to turn it off while driving on slush and snow. In this condition, the ABS will in fact increase the braking distance.

That’s because when the wheel lockup on snow, the snow keeps piling up in-front of the tire and that helps stop the car as it’s dragged along under the tire.

ABS is probably one of the best innovations with respect to vehicle and passenger safety. Yes, it needs to be treated with caution because machines can always make errors. That being said, the chances of that happening are very small, and it would be foolish not to consider going for an ABS just because of this one reason.

Being an almost regularly developed piece of technology, we have high hopes for this engineering marvel, and can’t wait to see what it’ll turn out to be in the near future as it’s refined further.