Home » Featured » What is Straight Pipe Exhaust System? Should you Get One? 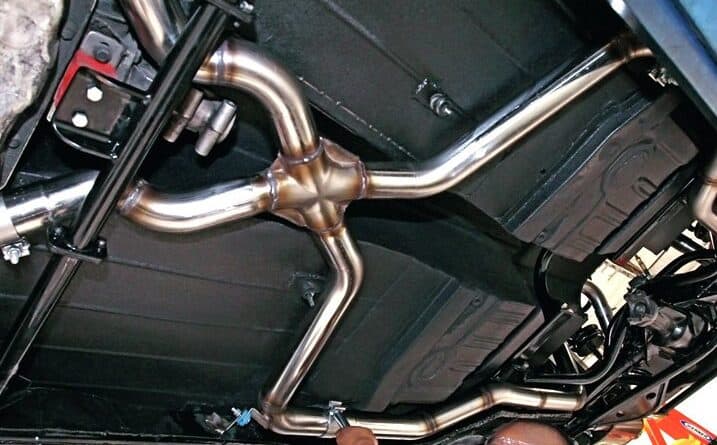 Chances are that you’ve been in at least one or more situations where you got into someone’s modified streetcar and turned it on and pressed upon the pedal, only to hear a sound that is very uncommon and not the standard sound that a car would usually produce.

If you’ve ever wondered why, it’s highly possible that there’s something going on in the rear of the vehicle, more precisely in the exhaust system. In this article by Motoring Junction, we’re going to take a look at one of the best – or worst – things to happen to your vehicle: a straight pipe exhaust.

What is a Straight-Pipe Exhaust?

A straight pipe exhaust is a replacement to the plain old standard exhausts you find in cars when they leave the showroom. For some enthusiasts, the exhaust sound and performance of a vehicle matters far more than emission norms, while many consider this irresponsible, you just cannot ignore the fact that almost all vehicles these days sound bad and controlled.

Industry-standard exhaust systems are designed to suppress and muffle the sound of a vehicle. Not to mention, it’s a heavy set up with things like DPF filter and catalytic converter dangling underneath the car.

At the root, straight pipe exhausts are not that different from standard exhausts, except the exhaust pipe runs all the way from the exhaust headers to the end, without any catalytic converter or muffler working to reduce the noise (we’ll get to the environmental implications of doing this in a bit).

So now, there’s nothing stopping the exhaust gases from running freely through and flowing out the exhaust tip. This results in the sound that motorheads love and go crazy about, and most older neighbors hate.

Now, there are a lot of people love straight pipe exhausts and another bunch of people who hate them. Let’s take a look at why people are at such extreme poles when it comes to these noise minting bad boys.

This may come as a shock but getting rid of the catalytic converter helps the car minimize a lot of back pressure resulting in increased torque and higher horsepower. For many motorheads, this is an absolute no brainer – more horsepower equals better vehicle. In many instances, there is also a notable increase in fuel economy.

This is a deal-breaker for many streetcar fans. There is a belief that a car must reflect your personality, and you don’t get this with cars fresh out of the factory. With standard exhaust pipes, you don’t get that appeal which would make you stand out from the crowd and express yourself. Straight pipe exhausts seem to give motorheads the ability to show off their true personality and make their car truly their own.

As we mentioned earlier, the engine is at its most natural, loudest form when it isn’t held back by the muffler. This is a major reason why most fans prefer a straight pipe system. There’s something about the sound of an untamed engine that just feels right. And that’s what gets motorheads going.

When you take off weight from your vehicle, it not only becomes lighter but also faster and more efficient. Hence manufacturers always take this into consideration while designing a vehicle. When you change your exhaust to a straight pipe, you are shedding additional weight, thus making the car a lot more enjoyable. This is also one of the reasons why straight pipe exhausts are an attractive option for many buyers.

When we tell you that installing these straight pipe exhausts will most probably result in your neighbors calling the cops on you, we are not kidding. Getting rid of the muffler will make your engine a lot louder than you expect, and will draw a huge amount of attention as a result, both good and bad.

Not Good For The Environment

With the catalytic converter not in place to filter out the harmful components (CO2 and Sulphur to name a few) in the exhaust gas, they easily mix themselves into the atmosphere and cause a great deal of discomfort in the long run. Phenomena like acid rain and global warming are a few effects of such harmful emissions. Straight pipe exhausts, therefore, get a lot of flak from environmental activists and you might want to think twice before setting up a straight pipe if your neighbour is an activist.

Straight pipe exhausts do not come cheap. Apart from the equipment, you will need a professional to take care of the installation because the process is certainly easier said than done. And even if you somehow do have the mechanical calibre to perform the installation yourself, the equipment will surely put a considerably large hole in your wallet. Make sure you keep that in mind before jumping in just to make your vehicle sound cooler.

In many cities and countries across the globe, straight pipe exhausts are illegal. In fact, many countries including USA have banned customisations of any kind on your vehicle, in order to safeguard certain laws and control crime rates. This is one of the reasons why your vehicle’s resale value will take a massive hit once you’ve customised your exhausts.

Now that you know what a straight pipe exhaust is and how it is better – and in certain situations worse – than a standard exhaust system, choosing whether or not to upgrade to one ultimately lies with you. If you’re not one to care much about your vehicle’s resale value, and you love to hear the sound of an untamed engine, you can definitely go forward without second thoughts because a straight pipe is sure to leave you satisfied for ages.

Read: Should you tune your car’s ECU