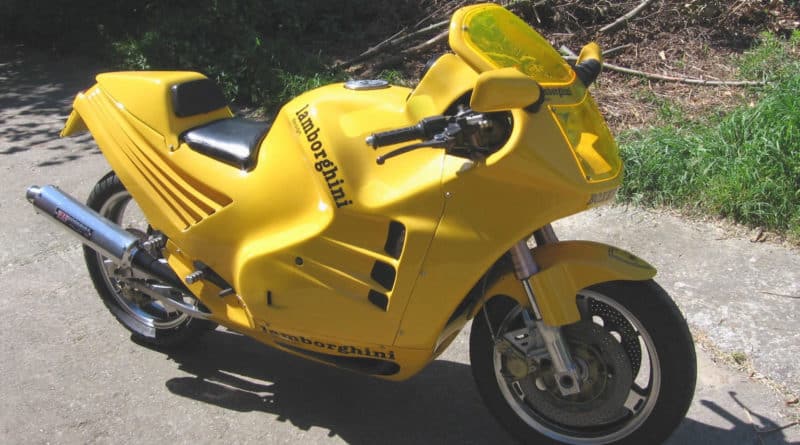 In May 1963, an enraged Ferrucio Lamborghini decided that he would not let the insult bestowed upon him by Enzo Ferrari slide. He burst into his garage and vowed to deliver a better product than the one Ferrari had.

Cut to 2020, and Lamborghini is one of the most celebrated brands in automobile history, if not the best. Lamborghini has been known by the common audience as a maker of beautiful super sport and hyper sports cars. But what most people don’t know is that Lamborghini also manufactured superbike once. 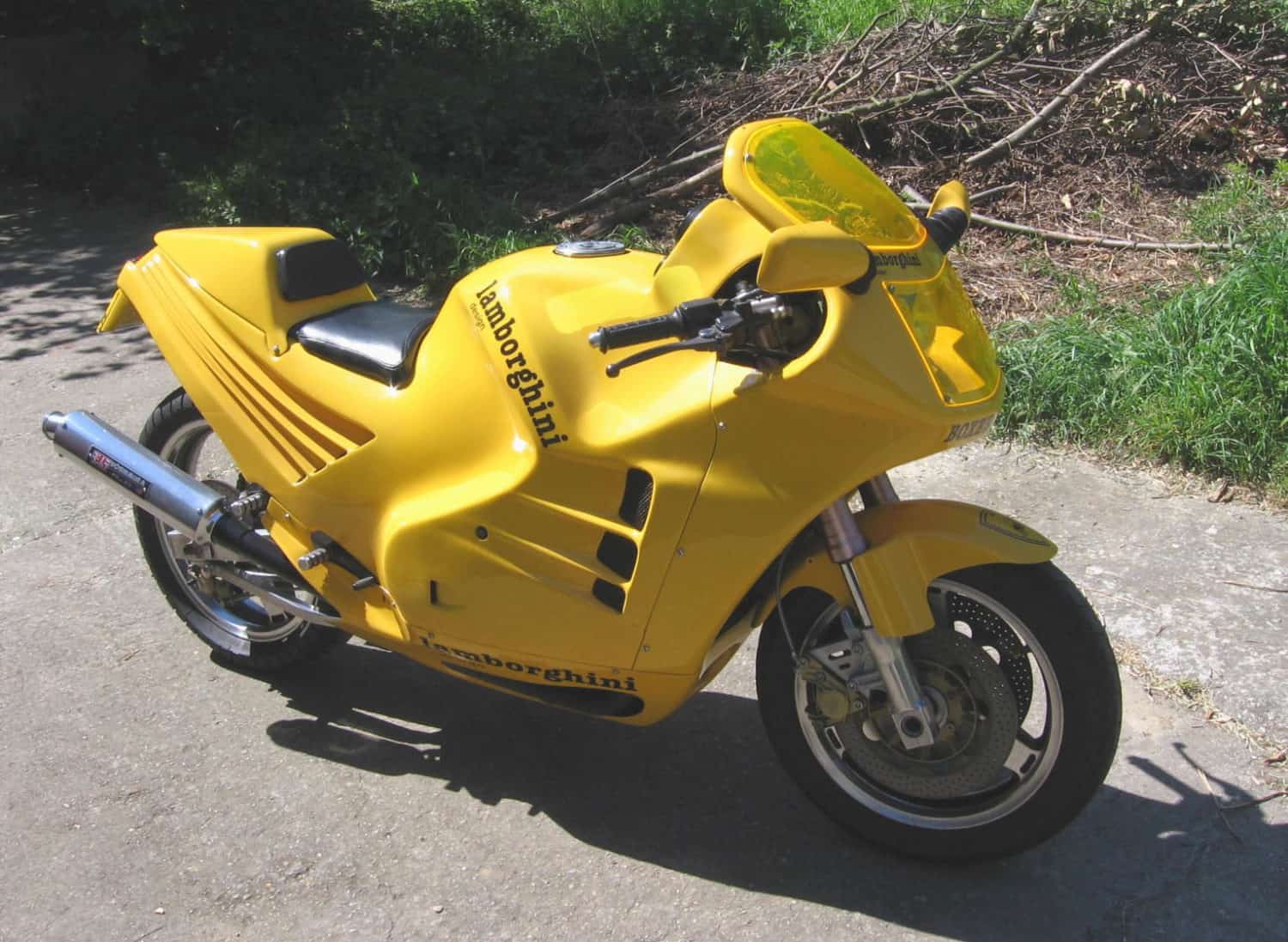 When Patrick Mirman took over the prestigious company in 1978, he restructured the entire company and built it up from scratch. Along with the Lamborghini Countach and the LM002, which were both huge successes, in 1986 Patrick also introduced the Lamborghini Design 90, a 997cc (there were also believed to be offered with 750cc and 900cc engines) superbike.

Very little is known about the bike, and rightly so. Lamborghini only produced around 50 of these mad horses, and could not really manufacture more because of the (very) generous price point. Citing from different sources, we’ve scraped up as much information as we possibly could on these beauties from the golden era.

The Lamborghini Design 90 was a majorly overpowered superbike for its time. Priced at $13,500 (that’s a whopping 9.60 Lakh Indian Rupees). At that time, this price was almost double of Japanese Superbikes with similar performance. 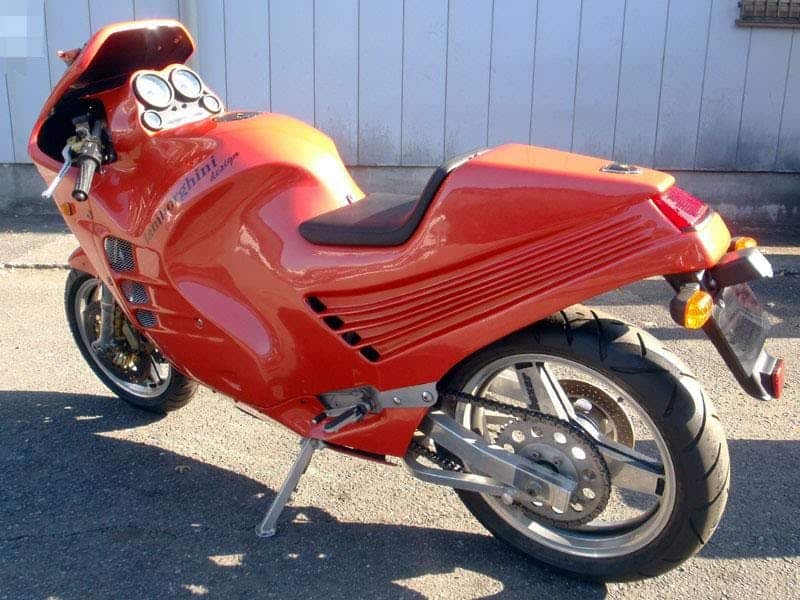 We know that Design 90 had an overwhelming 997cc inline-four-cylinder engine. It also had gold plated disc calipers (they were really cadmium plated, coated to give a gold look). Well, you would most certainly expect something like this if the company is as big and well known as Lamborghini. The genius design was actually introduced by Brembo braking systems, another Italian giant in the brake manufacturing sector.

Let’s talk about aesthetics and design. Given the limitations in technology and research, you would expect Lamborghini to bring something similar to a vehicle like the 1986 Yamaha Tenere

Well, Lamborghini decided to go for something different.

You might think the design is way off now, but in 1986, this was considered… “sexy”. Boxer bikes were all the rage during this era, and the design clearly shows. It was also stated that Lamborghini did not design the vehicle themselves. In fact, Boxer Design was the company that designed and assembled this Lamborghini Motorbike.

Engine was borrowed from Kawasaki GPZ1000RX (Video below)

The body contained several vents to allow near-perfect aerodynamics for the vehicle, for greater turns and faster acceleration speeds. The raw power from the engine had to be directed to the wheels, and the boxed design would certainly be a hindrance to the performance. That is exactly why these “holes” in the body, along with streamlined pathways were carved out on the body.

Although this drastically reduced the overall presentation of the bike, it certainly boosted its performance.

Lamborghini had good success supplying V12 engines to powerboat manufacturers. But unfortunately, they didn’t have a small engine for using in their superbike.

But Kawasaki had a lineup of motorcycle engines that were ruling the superbike segment at the time. Kawasaki gave their 750cc , 900cc and 997cc engines to Lamborghini. All of these were inline four cyclinder engines that produced power in the range of 80 PS to 130 PS. These numbers might seem like Meh today but back then these engines went into the top of the line superbikes.

Unfortunately, only 50 of these bad boys were made, and nothing more. Besides, these bikes were not a hit with neither the users nor the community. Recently, one model of the Design 90 was put up for auction, with an asking price of $58,000. Pretty reasonable, one might think, given the brand name and the limited edition. Except, the bike failed to attract even a single bid[1].

Lamborghini Design 90 was a failure by all means. The reason why Lamborghini may have designed this bike may well be a desperate attempt from Patrick Mimran to keep the company running before he sold it to Chrysler in 1987.

The year difference between the launch of the bike and the selling of the company further strengthens this hypothesis. Chrysler and the other owners of Lamborghini (The company has changed so many hands over the years before being accepted into the Volkswagen family in 1998) realized that Lamborghini was better off producing fast racing sports cars, and not bikes.

We probably may not see another bike from the Lamborghini family ever, but while it lasted, the Design 90 certainly made history inflicting a permanent scar on the golden bull that was otherwise perfect.

There’s fast cars, slow cars, boxed cars, insurance tips, battery care, cheat sheets, and so much more. Be sure to check out our website now!