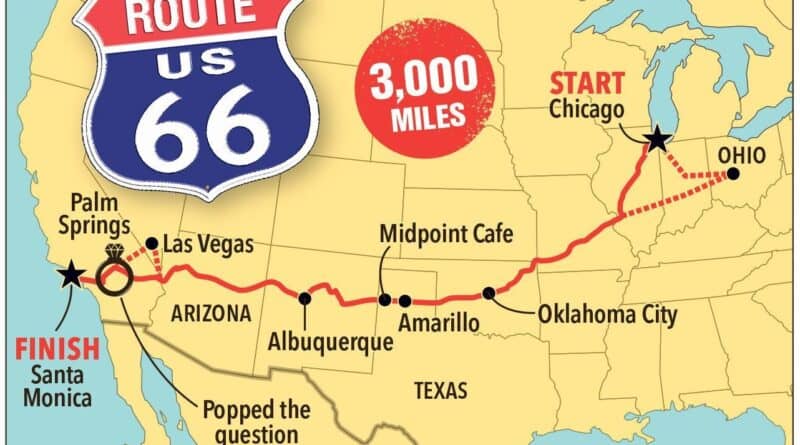 It’s a common saying that you haven’t fully experienced America until you’ve been to Route 66. This part of America has been preserved for such a long time that it stands as a testament to American culture and its proud history.

We live in a society that is almost always confused and constantly focused on the next big thing. This road is a proper getway, in every essence of the word – it offers people the opportunity to get to know a bigger part of their history, the treasures, and lessons it holds, and why you need to keep coming back for more.

Let’s take a look at the rich and beautiful history of Route 66, and how to make the most of your trip there. But first, let’s find out a little more about this historical route.

Route 66 is quite famous not just because of the road but also for all the great feelings of freedom and serendipity that it sort of injects into you. It also represents the living history and the case study of how the Americans moved, multiplied, and thrived.

Note: It would be more fun if you travel towards East on Route 66 because the west side needs some much-needed renovation and revamping.

One of the most important reasons we recommend anyone who’s new to America to travel along Route 66 is to experience how America was back during its “developing” time. Before it was given the name Route 66 – we’re talking way back in 1926, before the path had even been paved – it was owned by the Old National Trails Highway, which is one of the country’s first Transcontinental highways.

Route 66 was awarded the “main street” of America title after World War II, because it went across connecting all the small towns through Midwest and Southwest, lined up by different kinds of cafes and motels. There were also several gas stations where people could stop and take in the gorgeous scenery.

Back in times of The Great Depression, there were a lot of farm families who made their way into California through Route 66, searching for better means. Off to the end of World War II, there were a lot of people who wanted to leave the Industrial East in search of jobs around the suburbs of California, which followed through the part of Route 66. This paved the way for the demographic shift of the rust belt into the sun belt. Even though it is no longer the main road, or the most preferred one to cross the country, Route 66 has the same hype today as it had in the past, and it’s cultural impact is part of the reason.

The marvellous Meramec Caverns of Route 66 gave the world a bumper sticker to hang on to. and you should know that the symbolic American “driving vacation” started gaining traction only from Route 66.

All the billboards and giant statues came along on this Highway with a consistent roadside attraction, which tempted unsuspicious travelers to just stop for a while and admire the view of the giant blue whales and also take a look at the rattlesnakes. They also got to see the wild creatures that were on display on the roadside and were allowed to stay at “Tucumcari Tonight”.

While you enjoy this scenic road trip, make sure to stop at the popular attractions of Route 66. They truly represent American culture at its finest.

The Gateway Arch National park is more than just an iconic piece of architecture. It is also a museum that exhibits detailed outlines of the westward expansion of America. The building itself is a work of wonder. It is 650 feet tall and gives you a slight sense of how small you are.

Even if you are scared of heights, give this place a try, because Eero Saarinen – one of the most recognized didn’t design the world’s tallest arch for nothing. It is the tallest man-made structure in the US, and also offers some of the nicest views of Mississippi you could ask for.

One of the most adored attractions of Route 66 is the Blue Whale of Catoosa. It was built by Hugh Davis in 1970 as a surprise gift to his wife, Zelta, for their anniversary.

Because both of them loved whales so much and collected figurines of tiny whales all the time, Hugh thought it would be a great idea to build his wife a gigantic whale. Take your time to wander around the remains of this magical place, surrounded by picnic benches and a calm lake to blissfully spend the afternoon with your kids.

There are around 10 Cadillacs on Interstate 40. All of them have been buried in the same angle, similar to the great pyramid of Giza. Most of the visitors are often asked to bring out a can of spray paint along with them to make their own unique roadside art illustration.

This has become kind of like a rite of passage that almost every passerby goes through. The Cadillacs, as you can guess, have gone through a lot of changes over the years. They’re no longer just pieces of garbage like the previous generation thought they were, rather a standing testament to American culture.

It would be hard for you to believe that there is a ghost town that isn’t more surreal and spine-chilling than Oatman Arizona. The lost town is located at the edge of Arizona on Route 66, which has been poached down at almost 2,700 feet above the sea level, located in the Black Mountains.

If you are looking for a strange, chilling place to run by along mysterious wild burrows, then Oatman is the place you need to be at.

This is what you might call the endpoint of the mother road. The Santa Monica Pier is the place where you go to stretch up your legs and take breathtaking photos, before you go deep into the 2000 mile trip East.

Surely there are a lot of people out there, but that shouldn’t stop you from taking a ride on the Carousel, which was built during 1922, and take a trip to the Soda Fountain. There are even roller coasters and Ferris wheels with an arcade as well, that is even a sign which notifies that this is the end of route 66 where there is a lot of fun to be had.

A lot of people might say that it only existed as a unification, which has been a legally codified road for around 59 years. Between the years 1926 and 1985, Route 66 had become a symbol of a railway through human civilization. This would go on to become a route that reshapes the world, transporting millions of adventurers, migrants, grifters and even dreamers who wandered into America – the land of opportunity.

New towns have been born because of Route 66. Not only that, but new industries and new vernacular architecture have also been instated. However, with time, most of it was lost when the country people travelled back or migrated to their interstates. There is still hope, though.

One might still say that there is a thriving community of people who live along the road. Some travellers and preservationists pass by Route 66 all the time. They’re always bringing in new stories with them and also giving out donations for the protection of landmarks and to maintain the museums, because a lot of people have been trying to protect the legacy of it. The future of Route 66 looks bright thanks to Roadtrippers like these.

Route 66, also known as the mother road, has been a fabled legend of American myths for many years now. During the 1940s a person named Bob Troup had apparently pounded out “get your kicks on” on Route 66. It caught on really quick, and even today years down the line, the slogan is kept alive by dozens of artists like Nat King Cole and even The Cramps.

During the entire decade of 1960, CBSE had brought a production crew for a series shooting in Route 66, marking the start of many other films and series being shot on the iconic road. In 1985, the mother road disappeared from the official maps, and even the signage had been removed. Surprisingly, however, its popularity has only grown from that point. Hollywood played a huge role in this keeping the aura of this route alive.

The End And The Beginning

Route 66 officially commences from downtown Chicago and ends at the Santa Monica Pier, which resides in California. Along the entire journey from Chicago to Santa Monica, there are a lot of different sections that you will be able to discover and that is where the original road diverges.

You may be diverging into different directions, but inevitably will arrive at the same point. The road trip will prove to be a pleasant maze. You might take a few wrong turns along the way but even those will welcome you to new parts of adventure that will leave you grateful for America and its rich heritage.