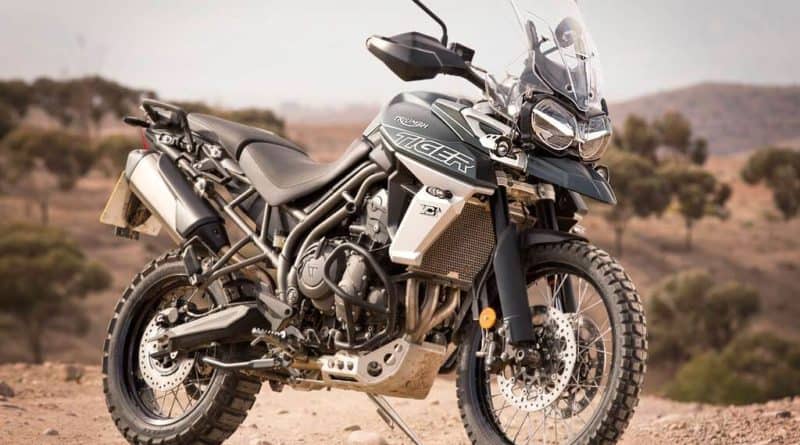 Adventure Motorcycle category is growing at a rapid pace all around the world. While sportbikes and naked motorbikes are still favourite among the younger lot, there’s no denying that adventure motorcycles are most practical.

Earlier this segment was ruled by European manufacturers. But today we have plethora of tasty options. Let’s look at some of the best adventure motorcycles you can buy today:

BMW G 310 GS is the entry-level adventure motorcycle. It was first revealed at the EICMA 2016 but the launch was delayed till last year. This motorcycle is the result of BMW – TVS technology partnership.

It’s powered by a liquid-cooled 313 cc single-cylinder engine that pumps out 34PS of power and 28Nm of torque. The engine uses a 6-Speed gearbox to send power to the rear wheel.

This might not be for you if you’re looking for something serious. But if you want a taste of adventure bikes, try this one out. It’s probably the best choice for a beginner adventure touring enthusiasts.

BMW Motorrad recently revamped its mid-level adventure bike lineup with F 750 GS and F 850 GS. The BMW F750 GS is pitched as a road-focused, can do it all motorcycle. While BMW F850 GS is offered as a purebred offroader (adventure bike). 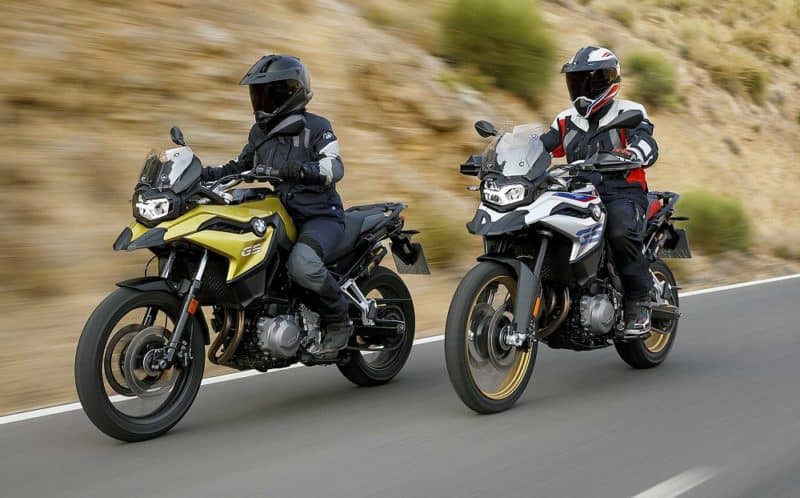 This is a bit of an oddball in this list. Want sportbike, touring bike and adventure motorcycle in a single package. Look no further than the BMW S 1000 XR. Although people often compare this to the Ducati Multistrada, the owners say that it’s completely different.

BMW S 1000 XR leans more towards a naked sportbike rather than touring bike. All said, there no motorcycle quite like this one. Its 4 cylinder powerplant has been borrowed from the S1000RR superbike but with a different tune. It makes 165 PS of power at 11,000 rpm and 114 Nm of torque at 9,250 rpm.

To control all that power in all types of terrain, BMW S 1000 XR comes with two adjustable riding modes “Rain” and “Road”. Along with power delivery, ABS and stability control settings are also changes with riding modes.

The R1200 GS is built to do one thing- go around world tour rides. It features beefed-up suspension, protection, big fuel tank, and a purpose-built chassis.

Does BMW R1200 GS intimidate you? Then Honda Africa Twin should be the one for you. It’s easy to ride package with low seat height, lightweight, smooth power delivery, and optional automatic DCT gearbox.

‘Africa Twin’ is a legendary name in the adventure touring community. That name was built by the original XRV750 (1990-2003). The current iteration of Africa Twin was launched in 2017.

The new Honda Africa Twin gets a liquid-cooled 999cc parallel twin engine that churns out 90 PS of power at 7,500 rpm and 93.1 Nm of torque at 6,000 rpm. For the gearbox, there are two options 6-speed conventional or 6-speed Dual-clutch automatic gearbox. In India, Africa Twin is only offered with an automatic gearbox. That’s a limiting factor as well as its unique proposition.

Triumph Tiger 1200 is again the top of the crop when it comes to adventure motorcycling.

The Tiger 1200 lineup is segmented in two. Adventure tourer’s favourite, XC range has spoked wheels and more off-road-ready elements like handguards and off-road pegs. This is offered in two trim levels: the XCX and top-shelf XCA. 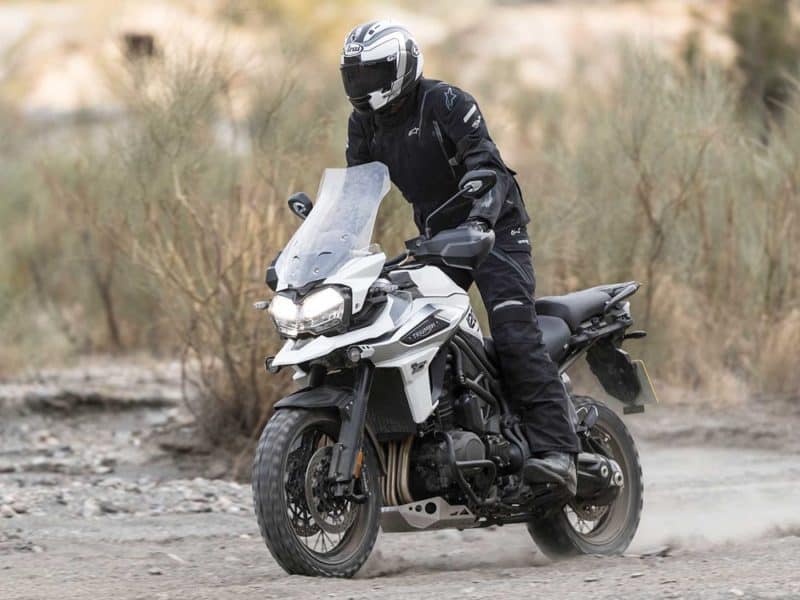 The XR range is more road focused. It has cast-aluminum wheels and is available in four trim: XR, that doesn’t get the TSAS semi-active suspension among other features; the XRX, the XRX LRH, a shorter version with a 31.1-inch to 31.8-inch adjustable seat height and dedicated suspension; and the range topping XRT.

Inspite of being relatively new motorcycle, the Tiger 1200 has stolen lots of BMW R 1200 GS customers.

The mid-level Adventure bikes are quite a rage nowadays, thanks to motorcycles like Tiger 800. They offer a more affordable package with not much to lose when compared to their bigger counterpart. The Triumph Tiger 800 is also more flexible when it comes to usage. It feels at home during casual city commutes as it does while tackling long road trips to offbeat locations. It would feel kind of odd to use Tiger 1200 for office commutes. So that’s what it is, a less serious adventure bike.

KTM engineers are the masters when it comes to making enduro motorcycles that actually win races. All that race winning technology is trickled down into the 1290 Super Adventure R.

This motorcycle is purpose-built to do one thing and one thing only, that is to munch some off-road miles.

The hot news nowadays is that the updated version of KTM 1290 Super Adventure will launch in 2020. In fact, several reporters have published the spy images of the test mule.

It gets a new 1260 cc Testastretta DVT 1262 motor with fat torque curve and improved chassis for greater ease of riding at low speeds or tackling offroad course. There’s one restriction though, The seat height of 840 – 800mm filters out short riders.

Suzuki V Storm 1000 is not that popular in the adventure touring fans, but it’s something that can challenge the best of the best.

Japanese manufacturers like digging into the parts bin of different models and mix and match new concepts. However, V-Storm 1000 is a ground-up development that’s built to excel at “sport adventure riding”. 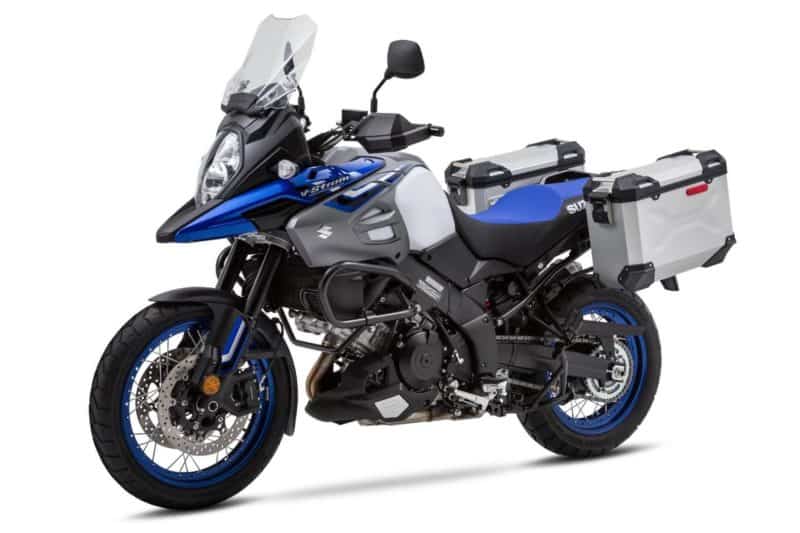 For the engine it gets a 1037cc V-Twin liquid cooled engine tuned for low-end and mid-range torque. Suzuki wanted it to perform on the tight tarmac as well as on the offroad trail. This engine develops 100 PS of power and 103 Nm of torque

Yamaha was the latecomer to the adventure motorcycle party. It was only in 2010 that Yamaha Super Tenere landed in Europe and disrupted the BMW-KTM monopoly. The latest 2019 Yamaha Super Tenere has come a long way since then. This motorcycle was known to be better than heavy adventure bikes in the dirt, and the same ethos continues with the new model.

This bike is powered by a 1199cc parallel twin engine with 270 degree crank for high torque figures. The engine itself is mounted low for the reduced centre of gravity. This shows up well while carving tight corners.