The Tesla Model 3 could possibly be the most important car of this decade. This is an electric vehicle that will cater to the greater mass due to its aggressive pricing. Even before the car was showcased, the company had received around 4,00,000 pre-orders amounting to over $10 billion (Rs 64,155,0000000). Now, that’s how the market says “Take my money.”

Last Friday, Tesla delivered the first 30 Model 3 to its customers (employees mainly) at a special event organised at its Headquarters in California (scroll down to watch the video). Now, Tesla Model 3 is an important car for India also. As the pre-order bookings were opened up for Indian consumers. However, a few months back Elon Musk’s Tweet hinted that Model 3 Launch could be delayed.

We will have a wait for quite some time because the right-hand-drive version will go into production only in 2019. The exciting part about this event was that now we know a lot more about the car that received $10 billions worth of orders just based on the reputation of Tesla. Does it live up to the expectations? Let’s find out-

On the base of the Tesla Model 3 is a completely new platform. The design language is however carried over from the other Tesla offerings including Model S and Model X. The production ready Model 3 doesn’t differ much from its concept prototype. Due to the lack of engine in the front, the hood of the car is narrower, offering superb visibility from the cabin. Like the Model S, the Model 3 also has a coupe-type downward sloping roofline. At 184 inches, the Tesla Model 3 is about a foot shorter than the Model S. It rides on chunky 18-inch alloy wheels as standard. While 19-inch wheels can be picked from the options list.

The electric motors used in the Model 3 are completely new but its specifications are still kept under the cover. The company is saying that the Model 3 can easily keep up with the BMW 3 Series.

The company has confirmed that the Model 3 won’t be getting their most powerful P100D 100 Kwh battery pack. This they say is due to the shorter wheelbase of the Model 3. That said, the Tesla’s Ludicrous mode will find its way on the Model 3 also. This mode in the Model S transforms the car to deliver maximum acceleration, which is good enough to compete with supercars. Click this to read more about Model S P100D

However, the newly developed battery pack for the Model 3 does benefits from technology transfer from the P100D battery pack. The result is a much denser battery pack with an advanced cooling system for the Model 3. Of course, the company’s new Gigafactory in Nevada also contributed in bringing the cost of the vehicle down by manufacturing these batteries on large scale.

Tesla Model 3’s interior is one of the most minimalistic cabins we have seen in a modern day car. Instead of buttons all around the dashboard, there is a massive 15-inch touchscreen. This infotainment unit controls most of the function of the car. The standard fitment on the car includes WiFi connectivity, auto dimming rear view mirror, rear camera, cloth upholstery, voice control, dual zone climate control, 2 USB ports, and Navigation. It’s quite loaded, isn’t it?

If you want more, there is a long list of options you can choose from. The Premium Upgrade Package is offered for $5000 (Rs 3.2 lakhs). This comes with Pore Wood inserts, premium audio system, Led Fog lights, two USB ports at the rear, tinted glass roof, 12-way electrically adjustable front seats with memory function and smartphone docks. CEO of Tesla, Elon Musk stated on Twitter that solar roof will probably be offered as an option. How much power the solar roof can pull is still a mystery. Presently, this option is not offered but we can expect this for the later production runs.

Having no engine saves up a lot of space in the Tesla. There are two trunks for storage- at the rear and under the front bonnet. The company also claims that the cabin space for the passenger is one of the best in the segment.

During the handing over ceremony for the first 30 Model 3, Elon Musk handed over all the keys to himself. Funnily, this was done because the Tesla Model 3 does not require a key. The company will program the smartphone of the owners with their cars, and they can lock/unlock the car using Bluetooth signal. As a backup, the owners will also receive NFC cards paired to their vehicle. One can just tap the NFC card on the B-pillar of their Model 3 to unlock the doors. To start moving, just tap the card between the front seats.

Tesla Model 3 fits right in to compete with luxury sedans like BMW 3 Series, Audi A4, and Mercedes C-Class. It’s direct competition right now is believed to be the Chevrolet Bolt EV that features high-speed charging and is priced very close the Model 3. Volvo seems to be the biggest threat for Tesla because the Volvo recently announced that all their new cars 2019 onwards will be Hybrid-Electric.

Also see- How Electric Cars can Succeed in India? 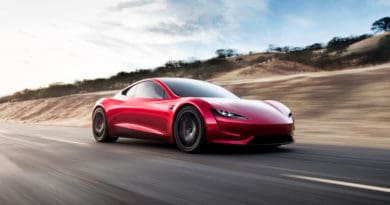