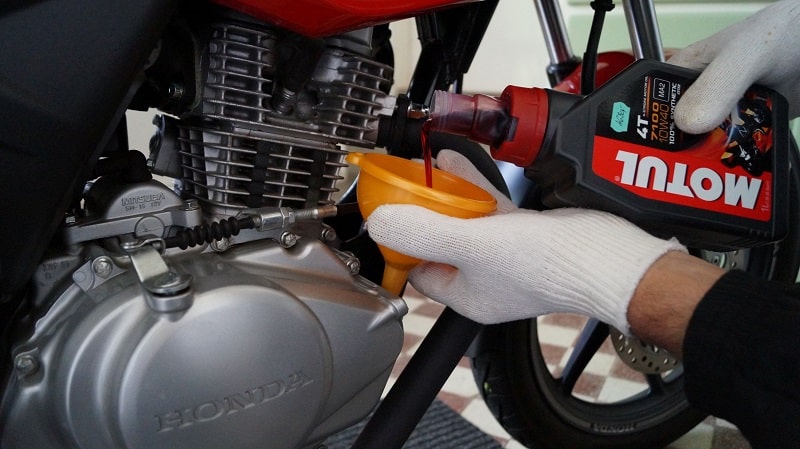 There’s a new misunderstanding created by the marketing departments of motorcycle manufacturers. It’s called ‘Oil Cooled’ engines. An engine is nothing but a giant block of metal in which countless explosions start happening the moment you turn it on. So, cooling the engine is a critical job as it prevents permanent damage to the internal components.

Liquid-cooled engines are cooled using a liquid. Duh! Oil happens to be a liquid. Then oil cooled equals liquid-cooled. Right?

Wrong. Oil cooled is a nifty feature for motorcycles, but calling it that is surely misleading.

What Is Oil Cooled?

An oil cooled engine has its engine oil circulating through the cooling fins, which in turn are cooled via the flow of air as you ride into the wind.

If you didn’t know, the engine oil does more than just clean the metallic dirt and lubricate the parts inside the engine block. The heat from the clutch pack also routes through the motor oil, which helps cool down the clutch by spreading it over a larger surface area.

Oil cooling is especially useful if the bike has to see a lot of half-clutching. Slipping the clutch creates a lot of heat, and it’s not good for the clutch assembly, especially the friction plates, which run quite expensive. The traditional fins surrounding the cylinder block help it stay cool.

These engines are easier to work on as they’re essentially air-cooled. If something goes wrong, you can DIY the hell out of it without risking permanent damage. They also don’t have to trade their cooling fins around the cylinder block for the oil radiator.

What Is A Liquid-Cooled Engine?

These have a jacket of coolant instead of the cooling fins. It wraps around the entire engine assembly including the gearbox and clutch cover. It takes over the cooling duties as a pump circulates the coolant through a zigzagging pipe hiding behind sharp fins called the radiator. A fan is also there, which jumps in if the speed isn’t enough to chill the coolant.

You won’t (generally) find fins on a liquid-cooled engine as they do it no good. The water jacket is enough to keep the engine within its operating temperature.

Also Read: How High Compression Can Lead To Knocking

Thanks to better heat management, a liquid-cooled engine can run for a longer duration and at a higher compression (higher compression means more powerful firing in the engine which translates to more heat). Liquid cooling keeps the heat within manageable limits.

That’s until something goes wrong. If you have a bad pump, fan or a leak in the coolant, then you better call roadside assistance. An easy fix in case of low coolant level would be adding water to the mix. The coolant anyways contains a large quantity of distilled water in it.

For more effective heat management, I use Motul coolant in my track motorcycles. As an added benefit you don’t have to figure out the perfect ratio of water: coolant as Motul coolant comes premixed already. You can check it out here

The term ‘oil cooled’ can be considered a marketing gimmick as it doesn’t accurately convey the functionality. A more precise term to define the feature would be ‘oil is cooled‘. Bajaj can be called out in this case as they were the first ones to market Pulsar as “oil cooled”.

What About Triumph Bonnevilles?

They’re an exception. The classic series of Triumphs under the Bonneville umbrella not only have fins around the cylinder but they also have a radiator. The purpose behind is to lend them a vintage appearance without sacrificing on the modern technology and features. The trick is to retain its old-school charm while hiding the tech in plain sight. Also Read: What to do if your car engine overheats