Maruti Ciaz spied here could be 1.4-litre petrol CVT automatic, which could launch later this year.

We had earlier reported that Maruti is going to launch three cars by Christmas. Among the three upcoming cars are the S-Cross facelift and the new Swift. Most industry experts are expecting the Celerio facelift to be the third car. Others like us are hoping to see a Brezza, maybe with a petrol engine. Maruti could throw a curveball at us making Ciaz the third car.

I was able to track the car for a while in Gurgaon. The driver was mostly driving the car at a constant speed varying gradually and keeping it between 50 and 65km/h. During the 15 minutes that I followed the car, never once did I come across a situation where he’d have to slam the brakes. In many cases, where most drivers would at least dab the brake pedal, the test driver didn’t even touch the brakes. He carefully chose lanes to avoid sudden deceleration. Both, slowing down and speeding up, was smooth and gradual. It could mean that the car was going through its fuel-efficiency test run on the national highway.

The car on test is the Zeta variant with 15-inch alloys instead of the 16-inch ones available on the Alpha. The Zeta’s alloy wheels with skinnier (185/65 R15) Goodyear Assurance tyres give it the lowest rotating mass and rolling resistance. The Delta has steel rims, and the Alpha has bigger (read: heavier) 16-inch alloys and wider 195-section tyres. The lower rotating mass plays a huge role in delivering maximum mileage.

Ciaz Spied: Not Getting DRLs

Team-BHP first saw the car a few days back but with its reflectors and fog lamps covered. I have spotted the exact, same car but with nothing covered up. Having a pair of brand new daytime running lights (DRLs) covered up under the wraps was one speculation. Now that I have seen the car up close with no changes to the reflector and for lamp region, there should be no reason to expect any design changes. As stated above, the engineers could be testing the car for its fuel efficiency and may have earlier covered up those areas to minimise drag.

Team-BHP had also earlier stated that the Ciaz wears no DDiS badge, which meant that it could be a petrol car. It indeed was a petrol car given how quiet it was while idling. When the car finally came to a stop, I was able to click a few snaps, piss off the Maruti engineers inside the car and get a quick peek inside. I noticed wires dangling around the dashboard and an automatic shift lever.

I couldn’t get a good look at the instrument console, but the previous set of spy shots show a larger multi info display (MID). The infotainment system looks like the one on the current Ciaz’ lower variants.

The Ciaz recently moved to Nexa, gained the blue body colour and lost the beige one. If Maruti wanted to give it new features or slight design update, they could’ve done it during its relocation.

Our Best Guess: New Ciaz CVT Automatic In The Pipeline

The best guess at the moment is that Maruti could be giving Ciaz a new CVT automatic transmission. The current Ciaz comes with a 4-speed torque converter. The fact that it’s both, a 4-speed gearbox and a torque converter, seem atrocious for a car of its class. The torque converter automatic is over a half-a-century-old piece of tech that’s nearing its end of life cycle.

Also Read: Types Of Automatic Transmissions: Which One Is The Best?

The Baleno uses a Continuously Variable Transmission (CVT), and so does Ciaz’ chief rival, the Honda City. Maruti also recently ditched the 4-speed torque converter in the Dzire petrol automatic for an AMT. A torque converter is heavy, consumes a lot of fuel and saps precious horsepower. CVTs are frugal and lighter than conventional automatics and are infinitely smoother in operation than AMTs.

Maruti could be prepping the Ciaz CVT for launch by the end of the year to compete against the upcoming Hyundai Verna. After all, a higher fuel efficiency figure is one of the biggest core values at Maruti Suzuki. 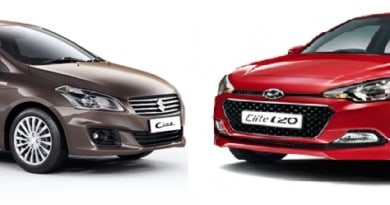 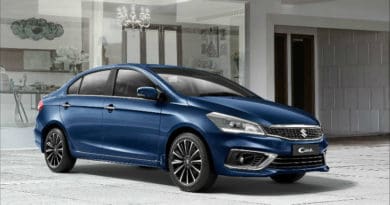